If God has a food court in heaven, one can only assume He has an Alvin Ord’s Sandwich Shop among the mix. What can only be described as New York deli meets larger than life Texas appetite, Alvin Ord’s is a divinely blessed maker of sandwiches.

With its origin dating back to the early 1970’s, Alvin Ord took his mothers passion for baking bread, and his love for creating sandwiches, and soon opened a sandwich shop in Austin, Texas. With his two nephews Rick and John Skinner (UT students) helping him, Alvin’s shop soon became a regular stop for college kids, business people, and everyday folks seeking great tasting sandwiches.

But a higher calling led Alvin to gain acceptance into the Trappist Monks of Washington State, leaving Rick and John to take over the business. Soon they opened a second shop in Austin, franchising several others including a location in Beaufort, SC in 1983.

That’s where husband and wife restaurateurs Frank & Teresa Fang, former owners of Peking Gourmet, became interested in opening their own Alvin Ord’s, after nearly 30 years in the food and drink industry. With the help of their cousin Lee who was a close friend of Tom Lewis (Alvin Ord’s Beaufort owner), Frank and Teresa began scouting locations for their own sandwich shop.

Not wanting to compete in Beaufort the couple decided on Charleston, opening their Alvin Ord’s locale at the corner of Bees Ferry Rd. and Hwy 61 near Shadowmoss in the Bi-Lo shopping center. Enter Frank and Teresa’s son Jimmy, a freelance TV producer who was working for the Food Network, earning a Daytime Emmy nomination for his achievements.

With Jimmy on board to help with marketing and day to day operations, the family opened Alvin Ord’s Charleston back in March, closing soon after for the Corona Virus, officially re-opening on June 6th. Even with the virus, Alvin Ord’s Charleston has created a slow buzz, no doubt because the sandwiches are awesome.

Several people I talked to when I visited were former Beaufort residents, or had frequented the Beaufort location, and could not resist going out of their way in Charleston to enjoy an Alvin Ord’s sandwich. That alone says something about the quality.

The Fang family have poured their livelihood into Alvin Ord’s, and it shows, so much that Frank woke up at 3 am everyday for a month, to drive to Beaufort to learn from Tom and his head baker. Now that’s dedication.

But enough about their story, let me get to the meat (pun intended) of the story. If you want a sandwich (whether you get the small, medium, or large) that is teeming with meat on fresh baked French style artisan rolls, than I suggest you seek out Alvin Ord’s in West Ashley.

Alvin Ord’s is a sandwich shop that focuses on sandwiches. Among their 21 (lucky number) signature sandwiches are three that are divinely inspired including The Salvation. Ample amounts of ham, salami, and spiced luncheon meat blanketed under melted cheddar, mozzarella & Parmesan adorned with lettuce, tomato, onion, and mustard, all on oversized heavenly baked bread. Totally satisfying. The Cheese Salvation allows for extra helpings of cheddar and mozzarella. Hallelujah!

Alvin Ord’s Reuben Sandwich is a slight variation of a New York City staple. Warm thinly sliced pastrami under sauerkraut, melted Swiss, mozzarella, cheddar & spicy mustard on Alvin’s signature bread. Diehard New Yorkers will no doubt miss the rye. Traditionalists will opt for thousand island dressing instead of the mustard. Both are sensational. I recommend stepping outside your comfort zone once in a while.

Not a fan of cured meats, than maybe try the Rachel. Basically it’s the Reuben, replacing the pastrami with tender thin sliced turkey. Reuben and Rachel are both biblical names with lots of character, as are their namesake sandwiches.  You’ll find many of your classic favorites on the menu board at Alvin Ord’s. There is the BLT and Club sandwich (diner staples), as well as Tuna Salad, a French Dip, and a their own low country must have BBQ Sandwich, pulled pork on toasted bun w/ onions and your choice of yellow or red BBQ sauce on the side.

The Beaufort Philly is Alvin Ord’s salute to the ‘city of brotherly love’s’ most famous sandwich, aka the cheesesteak. Tender steak w/ sauteed sweet peppers and onions, melted cheddar, mozzarella, Parmesan & Swiss cheese. A slight variation, but enticing nonetheless! The North of Cuba celebrates a favorite from Miami and the Latino community. Pulled pork & ham, w/ melted Swiss, cheddar, mozzarella & parmesan layered with sliced pickle. It will wake up the taste buds! 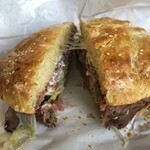 While you can substitute whole wheat bread, the round French is the preferred bread of choice. And don’t let the small, medium, and large rounds fool you. If you a decent appetite than the small will more than satisfy. If you come in extra hungry the medium will hit the spot. However if you carry a ravenous hunger into Alvin Ord’s the large fills a carnivore lovers sandwich desire. The medium and the large are ideal for couples to share, or a family with small children.

Not a day to eat with your hands, Alvin Ord’s offers three signature salads, ie Chef, Taco Salad, and either a Tuna or Turkey Plate, complete with bed of lettuce, tomato w/ turkey OR tuna salad (or both) topped with cheddar and mozzarella. Vegans can order sandwiches or salads without any of the meats.

Recapping, Alvin Ord’s of Charleston is somewhat of a New York and Texas inspired sandwich shop, with a low country twist. For certain you’ll never have to question ‘where’s the beef’ at Alvin Ord’s, because all their sandwiches come overflowing with meats and cheeses. All that is required is a healthy appetite.

Just a quick reminder, you’ll find them at the corner of Hwy 61 (technically 2875 Ashley River Road, Ste. 5) and Bees Ferry, adjacent to Shadowmoss Plantation. If you live, work, or find yourself in the vicinity and you get hungry for lunch or dinner than consider dropping by. Currently open Tues – Sun 11am-8pm for takeout and delivery. For more visit their site at https://www.alvinordscharleston.com/

WATCH: Rodney Scott Cooking Up Some Ribs on The TODAY Show