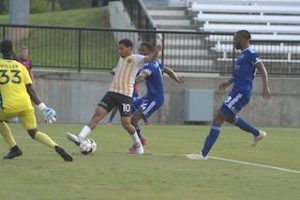 The Charleston Battery came out of their three-game road stretch Saturday night with a draw against NC rival Charlotte Independence. While the Battery maintained a high level of control up and down the pitch through 90 minutes, several opportunities that failed to convert meant the Charleston side had to settle for the draw.

Zeiko Lewis came on strong for the attack, back in the starting lineup. The Bermudian forward had five shots for the evening and kept pressure on the Charlotte back line all night which paid off in the 42nd minutes as a shot was deflected in by Independence defender Aaron Maund for the Battery’s lone goal on the evening.

The Battery, completing a grueling three-match away trip in one week, come out with two draws and a loss. The 2 points earned keep them on solid footing for second place in Group H and, with Atlanta’s 8/8 loss, maintain playoff qualification.

Fan favorite Dante Marini made his first start since March 8 against Atlanta. After battling injuries throughout 2019 and 2020, his energy is always welcome on the pitch as the midfielder yet again caused havoc up the middle against Charlotte.

More than the last two away games, the Battery came out strong right off the opening whistle and looked very much in control on both sides of the pitch throughout the first 45’. While multiple opportunities were created on the attack, including two corner kicks, converting on those opportunities kept slipping through. Zeiko Lewis was strong on the attack and his pressure paid off in the 42nd minute as a shot off a cross was deflected in by Independence defender Aaron Maund for Charleston’s lone goal. That score came just five minutes after Charlotte got on the board with a sneaky push by Independence, and former Battery forward, Dane Kelly as he got through two Battery defenders and pushed it from the left of the box to the bottom right corner of the net past Breno. “He’s the type of guy that can score something out of nothing,” noted Battery head coach Mike Anhaeuser. “We started the game well, we created some really good chances and unlucky enough not to be up 1 or 2 zero, they came down and it puts you under pressure.”

With all things even heading into the second half, the Battery looked to maintain control all through the final 45’. Charleston kept the pressure on with shots by AJ Paterson, Angelo Kelly, Lewis (2), and Ramorio Piggot all either just missing or handled by Charlotte’s netminder Miller. As Coach Mike Anhaeuser brought in the backup with Jay Bolt, Rennico Clarke, Deshawon Nembhard, Stavros Zarokostas and Mauro Cichero all subbing in during the latter half, both teams started to exhibit the pressure of securing the 3 points and notch the go-ahead goal. The Battery brushed off a late threat as defender Rennico Clarke was sent off with a red card and the defense stepped up and prevented a couple late breaks by both Martinez and Kelly on the Charlotte side. “It was really solid defending, they had two good chances and Phil made one great save on the far post that definitely kept the point for us,” Coach said.

On the commencement of the road trip Coach added, “In the end, it’s been a tough three road trips, we wanted to pick up 4 or maybe 6 points. We talked about it. I think this team’s good enough to pickup points on the road and we know that. Now the good thing is, you’ve played four away games. So we’re going to have a lot more home games coming down the stretch here. We’re very excited to get home next week.”

The Battery travel back to Charleston and look ahead to playing their fourth match against Atlanta United 2 Saturday, August 15 at their new home in Patriots Point.

How to Easily Find Suitable Clubs and Putters for You