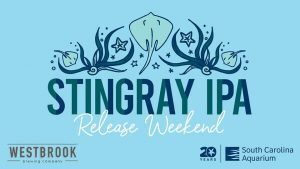 The Westbrook Brewing Company has partnered with the South Carolina Aquarium to create a new beer called Stingray IPA.

A portion of the proceeds from Stingray IPA sales will benefit the South Carolina Aquarium in support of its many conservation programs.

“Our community is facing tough environmental challenges including increased plastic pollution and impacts from climate change like sea level rise and increased storms,” said Kelly Thorvalson, South Carolina Aquarium conservation programs manager. “Collaborative partnerships like the one with Westbrook Brewing Company allow us to reach beyond our normal capacity to raise awareness about these challenges. We hope to inspire community members to take personal action to protect water, wildlife and wild places in South Carolina for future generations.”

Westbrook says the Stingray IPA “awakens the senses with its bold flavors and valuable meaning. It is a soft and pillowy IPA featuring Citra, Amarillo and Idaho 7 hops with enticing impressions of orange blossoms, lime zest, lychee fruit and ripe papaya (7% ABV).”

What Should You Wear On A Casual First Date?

Brookgreen Gardens Awarded Funds for Use During COVID-19