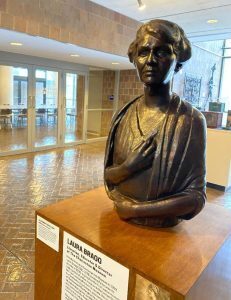 Laura Bragg (1881-1978), initially hired as a librarian in 1909 under the leadership of Paul Rea, became Director of The Charelston Museum in 1920 and continued to influence the field and Charleston as a whole. Among her accomplishments were the creation of the Charleston Free Library, opening the Museum to African Americans in a time when such public access was often limited to them, overseeing the purchase of the Heyward-Washington House, and the creation and implementation of Bragg Boxes for local schools.
Bragg Boxes consisted of special learning materials, which incorporated natural history specimens or historic dioramas, that were sent to schools throughout the Charleston area, both black and white.
Bragg also greatly expanded the breadth and depth of the Museum’s collections, including the acquisition of significant pieces of Edgefield pottery, made by David “Dave” Drake, an enslaved craftsman, who produced some of the most impressive pieces of these ceramics.
A century after she became its director, her legacy is still very much alive in the Museum’s collections, historic preservation and educational programs. The Museum’s current Director, Carl Borick, notes that “Bragg was a woman ahead of her time, providing key leadership for the Museum shortly after it became independent of the College of Charleston, playing a key role in Charleston’s preservation movement and expanding educational opportunities for adults and children regardless of race in an era of Jim Crow.”
Originally designed as a temporary exhibit for Women’s History Month, the Museum has extended the temporary exhibit honoring Laura Bragg, her legacy and artifacts from her time as Director of The Charleston Museum in the Museum’s Lobby. Items on display include original pieces of Edgefield pottery, Bragg’s personal belongings (coat, bag, fans) and original Bragg Boxes.
To honor her legacy, The Charleston Museum’s Board of Trustees recently voted to rename a main meeting space, the Laura Bragg Boardroom. The Charleston Museum is open Monday – Saturday, 9 am – 5 pm and Sunday 12 – 5 pm.
Laura Bragg: Librarian, Educator and Director of The Charleston Museum is located next to the Laura Bragg Boardroom. For more information, please visit our website.

Brookgreen Gardens Awarded Funds for Use During COVID-19