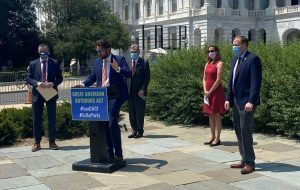 “It is an honor to lead the effort in the House to pass the Great American Outdoors Act”, said Rep. Joe Cunningham. “Today, the House passed bipartisan legislation that will deliver jobs to communities across the country, protect recreational access, preserve historic sites, and restore aging national park and public land infrastructure. For folks in the Lowcountry, this bill will protect some of our most beloved and treasured places, from the Cape Romain National Wildlife Refuge, Hunting Island State Park, and the ACE Basin National Wildlife Refuge, to the Pitt Street Park and Folly Beach Boardwalk. I look forward to President Trump swiftly signing this legislation into law so that we can protect access to the great outdoors for generations of Americans to come.”

Speaking at a press conference immediately before the vote, Cunningham said of the urgency to pass this legislation, “The Lowcountry depends on our recreational areas and open spaces to support the tourism and hospitality industries that play a massive role in our economy. As we continue to recover from COVID-19, this legislation will provide new jobs, protect recreational access, preserve historic sites, and restore aging national park and public land infrastructure.”

The Great American Outdoors Act passed the Senate in June with broad bipartisan support. It also has the support of more than 900 organizations across the country, including local businesses, the recreation industry, veterans groups, conservation organizations, tourism and travel associations, sportsmen, and infrastructure groups. President Trump has already expressed his eagerness to sign this legislation into law.

Speaking on the House floor before the vote, Cunningham said, “In this current climate of division and discord, the Great American Outdoors Act is exemplary of the fact that Republicans and Democrats can still come together to pursue common sense solutions, do right by our public lands, and keep our word.”

Follow us
Related Topics:Great American Outdoors Actjoe cunningham
Up Next