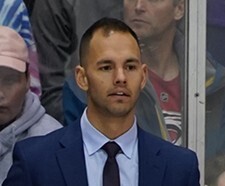 The team plans to officially introduce Blair to media at a virtual press conference on Friday at 11 a.m., which will be streamed live on Facebook.

“Ryan was instrumental in helping our team to a 44-14-4 record this past season,” said Stingrays President Rob Concannon. “I was very impressed with his work ethic and professionalism. He did a great job running our defense and developing our players. As a former player himself, he understands what it takes to be a pro, on and off the ice. All of the players I spoke to endorsed Ryan as our new head coach and he’s going to do a great job.”

Blair, 34, was hired as the team’s Assistant Coach and Manager of Hockey Operations last summer and helped the Rays to the ECHL’s best regular season record during the 2019-20 season while working under Head Coach Steve Bergin.

“I am very excited and grateful to be the next head coach of the South Carolina Stingrays,” Blair said. “This is a first-class organization that I am very fortunate to be a part of. I would like to thank Steve Bergin for trusting me and for bringing me in last year as his assistant. Bergy did an unbelievable job at teaching me the way and showing me what it means to be a Stingray. I would also like to thank Rob Concannon and Todd Halloran for believing in me from day one. I am excited to get started and can’t wait for the upcoming season.”

Blair also helped oversee the best defensive club in the ECHL last year, as the Stingrays surrendered a league-low 2.37 goals per game.

“We are confident that Ryan will be very successful as the next head coach following a long line of accomplished Stingray coaches,” said Stingrays Principal Owner Todd Halloran. “He has the trust and respect of the players which was one of many attributes that led to his selection. We can’t wait to get on the ice with Ryan at the helm.”

Prior to joining the Rays organization, Blair held the Director of Hockey Operations position with the UMass-Lowell men’s hockey team under head coach Norm Bazin during 2018-19. The former blueliner also had a 3-year professional playing career in the ECHL from 2011-14, totaling 117 games with the Cincinnati Cyclones, Toledo Walleye, Reading Royals, Orlando Solar Bears and Wheeling Nailers.

After the conclusion of his playing career, Blair spent time as both an assistant and head coach with the Boston Jr. Rangers in the Eastern Hockey League for three years from 2015-18. During his time with the club he helped oversee a combined record of 90-25-11 that included playoff championships in 2016 and 2018, as well as a regular-season championship in 2018. After the 2017-18 season, Blair was honored as the EHL Premier Coach of the Year.

Born in Toronto, Ontario, Blair also lived in Ashburn, Va. before attending UMass-Lowell from 2007-11. During four seasons of NCAA Hockey with the Riverhawks, Blair appeared in 141 career games and helped the program reach the Hockey East Championship game in 2009.