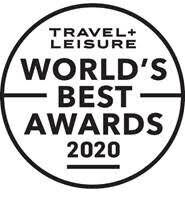 
For the eighth straight year, readers of Travel + Leisure magazine have named Charleston the Best City in the U.S. in the publication’s annual World’s Best Awards. In addition, the Holy City was slotted in as the 18th best city in the world.

The magazine had the following to say about Charleston’s top ranking:

“Charleston has history, architecture, culture, pleasant weather, gracious locals, and even proximity to the beach. But chances are, if you were to ask T+L readers for their top reason for their obsession with this genteel city, they’d say the food.”

Travel + Leisure‘s 2020 World’s Best Awards Survey is based on readers’ votes in categories like landmarks, culture, cuisine, friendliness, shopping, and overall value. The Holy City topped No. 2 New Orleans and No. 3 Santa Fe on the U.S. list. The top 10 list can be seen below:

Oaxaca, Mexico topped the World’s Best City list, besting San Miguel de Allende, Mexico. Last year’s top city, Hoi An, Vietnam, fell to No. 3 on the list. Charleston ranked first in the world back in 2016 and remains the only U.S. city to ever top the list.

Meanwhile, Kiawah Island was listed as the 5th Best Island in the Continental United States. Nearby Hilton Head checked in at No. 3.

The publication also put together a list of Charleston’s Top 15 Hotels, which you can view here. The list was topped by Wentworth Mansion.