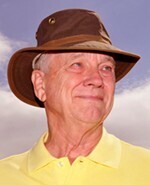 There are two things very distinctive about award winning author Bill Noel. He has an off kilter imagination and a passion about writing whodunits based on Folly Beach, South Carolina. Since 2007 Noel has offered up mystery novels seasoned with wry humor, all centered on the island town Charlestonian’s have dubbed, ‘the edge of America’.

For decades Folly Beach has been known as a utopian oasis. A small island community 20 minutes outside of downtown Charleston where hippies, off the radar baby boomers, surfers, and laid back folks find residence, to escape the everyday scene. Seldom does anything out of the norm happen on Folly Beach, with most full time residents befriending each other over time.

However in Noel’s twisted narratives Folly Beach is often the backdrop for murder and mystery. For the past 13 years Noel has provided one if not two books yearly, in what he aptly calls ‘The Folly Beach Mystery’ series. Many of the characters introduced early on in the series continue to work their way into each new novel. Business owners, retirees, and local officials permeate thru Noel’s writings. All are intertwined and rather curious to what’s happening on Folly.

Noel’s latest incarnation ‘Relic’, another murder mystery surrounds a recently retired couple who just moved to Folly Beach. Professed relic hunters, the husband soon turns up dead, with his widow casting different and sketchy accounts on how she found her way out of a preserve, asleep in her car early the next morning.

Chris and Charles, old cronies by Folly Beach standards like to think of themselves as part time crime solvers, however each has their own way of arriving at various conclusions, with Charles more of the island busy body and resident know it all. Will the twosome, along with the authorities, local historians, newfound friends, and other deranged island misfits unravel who killed Anthony Fitzsimmons? With residents pointing fingers at the widow, and other Folly Beach types, Chris and Charles are just trying to solve the island’s latest conundrum, all while avoiding daily mayhem.

The beauty of each of Noel’s books are that you don’t necessarily had to have read any prior to enjoy the one in your hands. If you enjoy a good murder mystery than I would put ‘Relic’ on your summer reading schedule. Bill Noel is a gifted writer, and he knows how to paint each character in his novels. And although he is a Kentucky native (only vacationing on Folly), Noel is equally adept on depicting the landscape, and daily life on the ‘edge of America’.

Pick up a copy of ‘Relic’ and maybe enjoy it while basking in the sun on Folly Beach. Just be careful what you look for! For more on Bill Noel and his previous books visit http://www.billnoel.com/