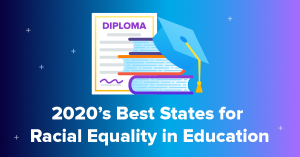 WalletHub recently released their rankings for 2020’s Best States for Racial Equality in Education and South Carolina ranked 42nd in the country.

In order to determine which states have the most racial equality in education, WalletHub compared the 50 states across six key metrics. Their data compares the difference between white and black Americans in areas such as high school and college degrees, test scores and graduation rates.

What are the best steps we can take to reduce educational inequality?

“One of the best ways to help reduce educational inequality is to make sure that all school districts receive similar funding regardless of the economic class or racial composition of their students. Currently, districts with high concentrations of minorities are often underfunded,” said Jill Gonzalez, WalletHub analyst. “In addition to promoting equal funding in public education, we should work on increasing access to higher education for minorities in underserved, low-income communities by simplifying the application process for aid, increasing need-based aid and creating special savings programs for low-income families.”

What impact does creating more equality in education have on equality as a whole?

“If educational opportunities are equal for people of all races, this will create more opportunities for minorities to advance into areas in which they are currently underrepresented, such as executive positions in companies and politics. Equal opportunity for higher education can provide more access to the scores of careers that require advanced degrees, too,” said Jill Gonzalez, WalletHub analyst. “Equality in education not only impacts career potential, but it also can contribute to better health, greater political participation and countless other benefits. Perhaps most importantly, a level playing field in the classroom may help reduce the income gap between white and black Americans, provided that we also address pay discrimination in the workplace head on.”

Why is Wyoming the best state for racial equality in education?

“One reason Wyoming is the best state for racial equality in education is that there is only around a one percent difference between the share of white people and black people who have at least a high school degree, and less than a four percent difference in the share that have at least a bachelor’s degree,” said Jill Gonzalez, WalletHub analyst. “In addition to a high level of equality in degree earning, Wyoming has one of the smallest differences between the graduation rates of white students and black students in the nation.”

Why does Wisconsin rank as the worst state for racial equality in education?

BCLS hosts Virtual Program “Miss September Presents. . .What if Reading Could Unlock the Doors to Our Imagination?”