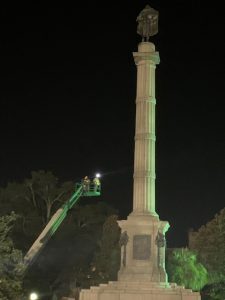 A few hours after Charleston City Council unanimously voted to remove the John C. Calhoun Statue from Marion Square in downtown Charleston, the city began the process of relocating the statue. The unannounced move began just after midnight on Wednesday and as of this posting was still underway.


Around 11:30 pm on Tuesday, the Charleston Police Department tweeted that Calhoun Street between Meeting Street and King Street would be closed to traffic for the statue’s removal. About 30 minutes later, workers began the process by moving cranes into Marion Square.

A group of around 50 people gathered to watch as the work crew inspected the monument. After a few hours, the crowd thinned out as it was becoming apparent that the removal process was not going to go as quickly as they hoped. You can watch a live stream of the removal below.

The statue will eventually be relocated to “an appropriate site where it will be protected and preserved.” That location will be determined and announced at a later date. Mayor Tecklenberg said he – in consultation with the council and others – would determine the statue’s new home. The resolution called for it to be moved to a “museum or academic institution.”

Mayor Tecklenberg originally announced the resolution on June 17, 2020, the fifth anniversary of the mass murder at the Mother Emanuel AME Church, which sits just feet from the Calhoun monument.