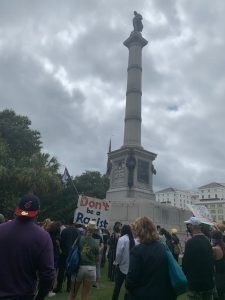 Charleston City Council tonight voted unanimously to remove the John C. Calhoun Statue from Marion Square in downtown Charleston. Calls to remove the monument of the former U.S. Vice President and slavery advocate had increased after the death of George Floyd.

Mayor John Tecklenburg’s resolution, which was announced last week, would relocate the statue to “an appropriate site where it will be protected and preserved.”

The date of removal and the statue’s new location will be determined and announced at a later date. Mayor Tecklenberg said he – in consultation with the council and others – would determine the statue’s new home. The resolution called for it to be moved to a “museum or academic institution.”

Mayor Tecklenberg originally announced the resolution on June 17, 2020, the fifth anniversary of the mass murder at the Mother Emanuel AME Church, which sits just feet from the Calhoun monument.

During that announcement, Mayor Tecklenberg said he did not believe the monument was protected by the state’s Heritage Act because the statue belongs to the city and sits on private property. Marion Square is owned by The Washington Light Infantry, which has said they will not challenge the city’s decision. Charleston’s decision has also not yet been challenged by state and it’s unclear if it will be.

UPDATE, 6/24/20 at 7:47 am – Just after midnight on Wednesday, June 24th, the city began the process of removing the statue. The unannounced move has led to street closures around Marion Square and is expected to be completed this morning.