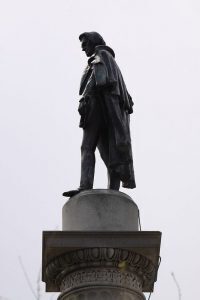 The City of Charleston on Tuesday released a statement saying officials “expect to be able to make an announcement on the future” of the John C. Calhoun Monument in Marion Square on Wednesday. It’s unclear what exactly the city will say, but anything less than the full removal of the statue will be completely unacceptable.

Anyone familiar with Holy City Sinner’s social media accounts is likely not surprised by that statement. Although I attempt to remain unbiased with most content I share, there are plenty of times I directly voice my opinion – or hint very heavily at what I believe. However, I’ve rarely hidden my disgust when it comes to the Calhoun Monument. Despite this, I’ve for three years sat on a half-written opinion piece regarding the removal of the statue that I regret never finishing and publishing.

As I mentioned above, I try my best to remain unbiased in my coverage of local happenings and stick to positive/fun stuff, but there is a difference between hiding my opinion about a particular restaurant or business and being complacent when it comes to important issues effecting our community. I do not view this as a political or editorial stance, but a Charleston equality stance that pushes the city and community to be more welcoming, understanding, and leaders in the fight for equality. This is me using my platform (however small) to say, “I have not done enough, but I will going forward,” and holding us all – business owners, politicians, civilians – accountable.

So, yes, this post is way overdue, but that doesn’t change the fact that this embarrassing tribute to a man that is best known for being one of America’s strongest defenders and promoters of slavery, needs to be removed from Marion Square, one of Charleston’s most popular gathering spaces. I applaud and fully support Charleston Wine + Food’s decision to cease use of the space to host events until the monument has been removed. I encourage similar events to follow suit if the city does not move to remove the statue. The monument is a symbol of hate and has no place being the background to any community events.

In the wake of George Floyd’s murder in Minneapolis, – and with today being the 5th anniversary of the horrific shooting at the Mother Emanuel AME Church (a block away from the Calhoun monstrosity) – the momentum to push city officials to finally do the right thing has never been stronger.

Mayor John Tecklenburg in 2017 proposed that the city add a plaque to the monument that provided context to Calhoun’s disgusting tribute. Although his proposal was far from ideal, at least he attempted to do something. Predictably, the absolute least the city could do regarding the monument was bungled, and plans for the plaque were essentially shelved. It may have been for the best though, as the last proposed version of the plaque removed the strongest and most direct criticism of the former Vice President and the time period when the statue was erected – “This statue…is a relic of the crime against humanity, the folly of some political leaders and the plaque of racism.”

I hope they make the right decision this time around. A plaque is not good enough. The monument needs to come down.

I know, I know. I can hear the same old arguments now:

The John C. Calhoun Monument was built to celebrate and honor a man that believed in white supremacy and the enslavement of black people. Those are facts about Calhoun, not opinions. The statue was erected, at least in part (although I’d argue fully), as an insult to Charleston’s black population. It has continued to insult that community for generations. Refusing to remove the monument honors the racist ideology of Calhoun and that time period in America history.

Admitting the monument needs to come down doesn’t mean you have to personally apologize for a statue you didn’t build, the institution of slavery, or the lasting effects of white supremacy. You’re not at fault for things that started well before you were born, but you are complicit if you remain quiet and allow this racist tribute to continue to tower over the so-called Holy City.

When it comes to this city’s history with race, many prefer to ignore the ugly parts and point to moments like the rallying cry of “#CharlestonStrong” and the unity walk across the Ravenel Bridge (another issue for another day) after the massacre at Mother Emanuel. Do you want to prove just how strong and united Charleston is? Demand the city do the right thing and remove divisive celebratory relics of our country’s shameful past that do nothing but cause pain for many in our community.

Our past makes this city “historical,” – and don’t get me wrong, we have plenty of amazing history worth celebrating – but our future, and how we act going forward on a daily basis, will actually make us “Charleston Strong.”

Actions speak louder than words, and taking down the Calhoun monument would certainly be a big action by the city, but if the statue is removed, we must remember there is much more work to be done. We need to focus on the movement over the moment and push the city (and ourselves) to support the black community in other ways. My pledge for the Holy City Sinner platform is do a better job promoting, sharing, and championing our black community.

Follow us
Related Topics:commentaryJohn C. Calhoun Monument
Up Next

The Year of the Mask, Hatred & Other Stupid Stuff

Commentary: Stop The Madness – Unruly Protests Never Help The Cause