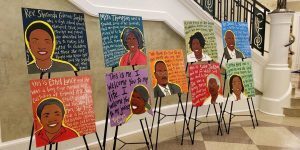 Rep. Joe Cunningham and Majority Whip Clyburn will host a virtual town hall on the 5th anniversary of the Mother Emanuel tragedy to call for action on gun violence, police brutality, and systemic racism. They will be joined by Rev. Eric Manning from Mother Emanuel AME Church, State Rep. Marvin Pendarvis, Everytown for Gun Safety, and community activists.

More than a year ago, the House passed legislation introduced by Whip Clyburn and Rep. Cunningham to close the so-called “Charleston loophole.” However, the Senate has yet to take up the bipartisan legislation. The coronavirus pandemic has caused a spike in gun sales that has overwhelmed the background check system, likely making the “Charleston loophole” even deadlier.

The virtual town hall will be held on Wednesday, June 17th at 4 pm. Click here to register for the event.