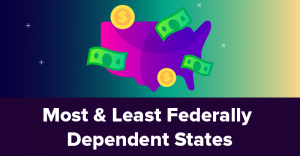 WalletHub today released updated rankings for 2020’s Most & Least Federally Dependent States and South Carolina ranked as the 7th most dependent in the country.


This report illustrates the extent to which states are independent economically. However, the oxymoron in this situation is that states with a higher level of federal dependence are likely better positioned to handle the coronavirus pandemic, given that most relief has come from the federal government. In order to identify which states most and least depend on federal support, WalletHub compared the 50 states across three key metrics: return on taxes paid to the federal government; federal funding as a share of state revenue; and share of federal jobs.