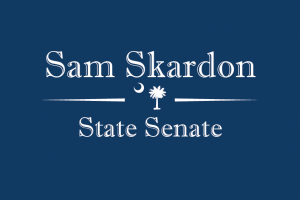 Skardon has raised over $150,000 in his race for State Senate, a fundraising record for a Democratic nominee in District 41. His campaign has pledged to not accept donations from PACs or special interest groups. The Charleston-raised candidate received recent endorsements from prominent South Carolina State Senators Marlon Kimpson and Margie Bright Matthews, and the Charleston City Paper.

“We need to change business as usual in South Carolina,” said Skardon. “For too long our public schools have been failing, our economy has worked great for those at the top but working families in District 41 still struggle everyday with healthcare, student debt, and housing costs. We sit in traffic and watch flood waters rise. I firmly believe South Carolina can lead the nation in public education, economic opportunity, fighting climate change, and innovative infrastructure.”

“At such a difficult time for our community, now more than ever we need to elect leaders who will fight and bring the bold change our district and state so desperately need. Now more than ever, the Lowcountry needs leaders who have a vision for progress and who will work tirelessly to move our state forward. That’s what this election is all about.”

Skardon was raised in Charleston. He served as an aide to Civil Rights Leader, and US Congressman, John Lewis. After earning an M.B.A. from Georgetown University, he returned to home to serve as the Director of One Region, Charleston’s regional strategy for sustainable and inclusive prosperity. Skardon now works at a community development finance institution focused on empowering small businesses and disadvantaged communities.

Senate District 41, which includes portions of James Island, Johns Island, West Ashley, North Charleston, and Summerville is expected to be one of the most competitive state legislative races in South Carolina this year. It is currently represented by a Republican incumbent but voted for Democrats James Smith and Joe Cunningham by 7% and 15%, respectively, in 2018.