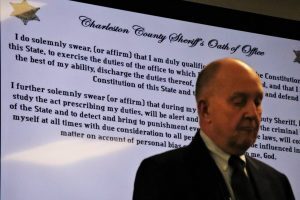 The Charleston County Sheriff’s Office on Saturday released a video of Sheriff Al Cannon’s statement to deputies on George Floyd’s death and the subsequent protests.

“What occurred in Minneapolis with George Floyd was absolutely and irreversibly a bad police action,” Sheriff Cannon said in the video roll call message to his deputies earlier this week. “It’s very disturbing, not only to see what they did, but the relative ease with which they did it…these folks are justified in being angry in demonstrating.”

You can see the statement below.
–