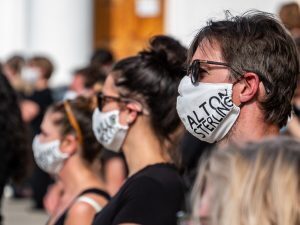 On Monday at the Four Corners of Law, a group of local community members wore masks emblazoned with the names of thirty black citizens killed by police. Solemnly and quietly, demonstrators stood six feet apart on the sidewalk in front of the United States Post Office and Courthouse. On cue, they knelt for eight minutes and forty-six seconds to commemorate George Floyd’s life.

While numerous law enforcement officers stood by, demonstrators crossed Broad and Meeting streets to City Hall, where they placed their masks, one by one, with the names facing out in a powerful memorial to lives taken by police.

“As we kneeled for the final minutes of George Floyd’s life, I was overwhelmed with so much emotion,” organizer Tiana Morton said. “I cried. I got angry, and afraid. I thought of all my black and brown brothers and sisters whose lives have been stolen.”

“When people risk their freedom and lives to pour into the streets, despite heavy police presence, it’s obvious that the criminal justice system requires fundamental change,” demonstration co-organizer Bonnie Cleaveland said. “Diverse people in cities around the nation are demonstrating to show our elected officials they can’t wait any longer. The public demands better officer screening, mandatory racial bias training, and racial audits for every jurisdiction.“

To see photos from the event, click here. The video below was filmed by Ben Wong. The music is by www.bensound.com.

Summerville Has Again Enacted a Curfew