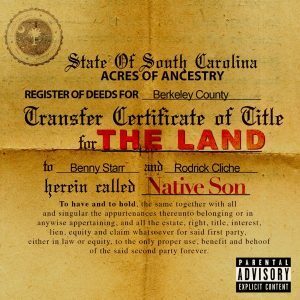 Local hip hop artist Benny Starr and Charleston-based soul singer and musician Rodrick Cliche earlier this month released a song in collaboration with the Acres of Ancestry Initiative/Black Agrarian Fund. The song, “The Land,” is the first official release from Starr and Cliche’s collaboration known as Native Son.
Starr described the release on his Instagram as “a defiant, musical message in support of Black Farmers and Land Owners who have long endured the pursuit of Land Justice.”⁣⁣ You can listen to the song on Spotify, Apple Music, Google Play, and Tidal. The video for the song can be seen below.

The Acres of Ancestry Initiative/Black Agrarian Fund is “a mutual aid ecosystem rooted in Black ecocultural traditions to regenerate land ownership, stewardship, and cooperative economies in the South.” They work to preserve the Black Family Land Commons through imagination, art, and cooperative economy. One of their current efforts is the Cancel Pigford Debt Campaign, which seeks immediate debt relief and the abolishment of county committees that continue to discriminate against black farmers.
The goal of the Pigford v. Glickman class action discrimination lawsuit was to provide black farmers debt relief, compensation, and priority of services, but more than twenty years after the decision, many black farmers face increasing debt and the possibility to lose their land.
In a separate Instagram post, Starr wrote:
“In building with Black legacy farmers, we learned of the rich history of musicians working in solidarity with farmers to demand restorative land justice from the racist and illegal web of misdeeds executed by the United States Department of Agriculture (USDA). Before creative musical force, Isaac Hayes, transitioned to the ancestral realm, Black legacy farmers were in discussions with Hayes to record a “rallying cry” song on their behalf. ‘The Land’ is our generation’s love offering to the long and relentless beautiful struggle to protect the 1.5 million acres of Black farmlands from USDA theft and dispossession.⁣⁣⁣⁣
⁣⁣⁣⁣
The incessant racialized extrajudicial killings of Black men, women, and children are chilling reminders that African descendants in the US need our agrarian maroon sanctuaries. Our Ancestors understood this solemn truth, dug into the dirt, and built villages of community and land sovereignty—respites to protect generations coming from racial violence and unforeseen pandemics. The Black Farmers’ Appeal: Cancel Pigford Debt Campaign venerates our Ancestors’ blueprint for self-determination. ⁣⁣⁣⁣
⁣⁣⁣⁣
Our work is not done. The demands of Black legacy farmers persist: cancellation of all USDA debts, full federal and state tax relief, return of the 1.5 million acres under threat of USDA dispossession to Black farmers (including farmland in USDA inventory), and a $2.5 billion restorative justice fund to regenerate the Black agricultural land base.”
–

Gambling Legalization Around the World