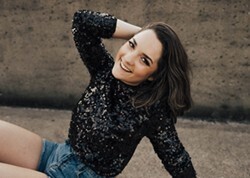 Just 21-years-old, singer-songwriter and Charleston native Haley Mae Campbell has made quite a splash on the country music scene in the past five years. Relocating to Nashville in 2017 helped propel Campbell into the spotlight. Her debut single and accompanying video ‘Oughta Be’ became a breakout hit on CMT (Country Music Television), garnering over three million streams and counting on Spotify.

Follow up releases including ‘Anything But Yellow’ and ‘Ghost Stories’ further cemented her domination on viral music platforms with the latter becoming another break out hit on CMT. While she was gaining success online and on video television formats, radio slowly took notice adding her to playlists. Her up-tempo song ‘Lose My Number‘, off her EP ‘Lovers Lottery’ proved the low country girl, born in New York has both moxie and southern charm. 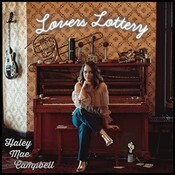 Although Campbell has been embraced by fans, she admits country music was not her first choice. “Let’s jump right in. Growing up I didn’t listen to much country music, and I even explored folk/rock, and pop before I fully embraced the country format. But even during those times, the storytelling elements of my songwriting were loud and clear. After dabbling in other genres, I released my first truly country single “Lose My Number” in 2017. I haven’t looked back since.”

With music one of her main passions, Campbell says she never really gave thought to any other career path. “To be honest, when I look back I truly don’t remember a time when I wasn’t drawn so strongly to music. It was never a full-on decision I made, it was just what I loved from such an early age that I always knew I wanted to pursue a career in music.”

In her mid teens Campbell says she was still trying to find her niche. “I started out in musical theatre growing up, and joined a few cover bands while I was in high school. I had been writing songs, but I wasn’t exactly sure what genre box they fit best in.” All that changed during treks to the country music capitol. “After making trips to Nashville throughout middle and high school, I couldn’t shake the fact that Music City was the right fit for me.”

Campbell defines her sound as a unique blend. “It’s partially a tribute to my birthplace (Bay Shore, New York) and my hometown (Charleston). I describe my music as city-slicker sass, mixed with hometown sensibilities and storytelling. I combine traditional country instrumentation with modern production to create crisp, shimmery country-pop.”

She may have found her home in country, but admits it’s key to visit other music forms. “After the experimenting I did between the release of my first album and my first real country single, I think it was important for me to learn about different genres and the boundaries that exist within them. By creating pop, folk, rock, and Americana music, I learned a few things about myself and my creative process.” The biggest thing she discovered. “I like to be extremely hands-on.”

Many of todays biggest stars in Nashville helped solidify her career choice. “My recent releases are influenced by the artists that made me fall in love with country music like Kenny Chesney, Taylor Swift, Kelsea Ballerini, and others.” Like other genres Campbell doesn’t imagine the road she’s taken is easy. “I think just like any format, country has its challenges, but now more than ever I am so confident and excited about the creative space I’m in and the music I’m making.”

While mom and dad’s music choices were among her early influences, Campbell say she eventually gravitated to contemporary Nashville artists. “Growing up a few favorites that my parents would always play in the car included Alison Krauss and the Old 97’s. After discovering more mainstream country, some of my biggest influences have been Kenny Chesney, Taylor Swift, Kelsea Ballerini, and Liz Longley.

Campbell has been compared several times to Swift, a mega star who found fame while still in her teens, often writing about what every young girl goes thru. “I think it’s a huge compliment to be compared to another artist, especially if it’s someone I personally admire.”

She uses the contrasts to help develop her own sound. “Everyone has a different taste and draws comparisons between things for different reasons, so I always try to ask what qualities they find similar about me or my music to another artist. It can be really helpful when determining your identity and your true brand to hear people’s feedback.”

Campbell’s method to songwriting runs at different speeds. “My approach to songwriting almost always starts with a word, or a title that I can use as the subject. Believe it or not, these pop into my head most often in the shower or driving in the car. I’m predominantly a melody-first person, and I like to brainstorm and voice memo melody ideas, and then work out the lyrics after.”

How often does she find time to work on her craft. “As far as my writing schedule, I go through phases where I have co-writes almost every day of the week, sometimes twice. But when I have a new release on the horizon, I tend to dial it back so I can focus on the artist side of things.”

Campbell may hang her hat in Nashville now, but the low country is her home. She is fond of all Charleston has to offer, and admits the Holy City often helps motivate her songwriting. “What I love about this question is that it has so much to do with my upcoming single, “Paradise.” Growing up in Charleston is a blessing that I was only fully able to appreciate after moving to Nashville, but still, I am lucky to be able to visit home often and maintain a strong connection with my fanbase and roots there.”

Many recall she cut her teeth performing here while still in high school. “I have so many amazing memories of performing at the Music Farm, Awendaw Green, and I’m going to be highlighting all of my favorite memories and places in the music video for the new single. While Nashville is certainly the right place for me to be right now, I will always love and treasure the ability to call Charleston my hometown.”

Like the rest of the country Campbell has kept busy during this time of self isolation. “Believe it or not, I’ve been working out every single day! It can be so hard to keep a routine when you live most of your life in a van, and I have really embraced an active lifestyle, which definitely keeps my mood up. I’m also constantly re-decorating my apartment, which is probably less productive, but much more fun!” 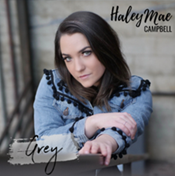 For more on Haley Mae Campbell visit her website http://www.haleymaecampbell.com/ or follow her on social media platforms. Her new single ‘Paradise’ is set to be released on May 22nd. You can stream her latest single ‘Grey’ on Spotify. This young talent is doing Charleston proud.

Campbell is scheduled to perform at Home Team BBQ at the end of May and early July if restrictions are lifted. She has another Charleston area date on May 30th as part of a benefit concert for SC Advocates for Epilepsy. To keep up on he tour schedule visit http://www.haleymaecampbell.com/tour