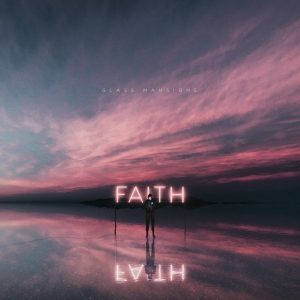 
While Glass Mansions’ previous work, “Ritual” found vocalist Jayna Doyle exploring self-discovery, demons, nostalgia, and the satisfaction and laser focus that comes with leaving toxicity in the past – this time her sights are fixated on the human connection (or the lack thereof).

“We spend so much time on our phones creating these false brands of ourselves to display on social media,” Doyle said. “People are desperate for a real human connection, but scared they’ll push people away (or lose followers) if they share their true selves. It’s such a waste of time to not be authentic — we have way more in common with each other over our flaws, failures and vulnerabilities.”

Doyle, who in the past has spoken out about mental health as a musician, says this culture of “toxic positivity” is damaging to the connections we experience with others.

“We need to erase the stigma and find empowerment through embracing our failures, weaknesses and vulnerabilities,” Doyel said.

The new song is about having faith that humanity still desires meaningful connection – both highs and lows – and serves as an anthem for those fighting to have their truth seen and heard.

That kind of resilience carries over into the band’s personal lives. Only a month before their Spring tour was scheduled to begin, Doyle was involved in a horrific car accident due to someone running a stop sign. The impact flipped her car several times before resting upside down, totaled.

“I couldn’t do anything but breathe and wait for the car to stop flipping,” Doyle said. “When I came to a stop, I was hanging upside down from my seatbelt. In that moment, all I could think about was ‘This isn’t it. I’m not gonna let this be where it stops’.”
She unhooked her seatbelt and crawled out of the crushed window before Emergency Services had even arrived. To the disbelief of police and medical help, Doyle walked away from the accident with only a concussion and severe bruising.
You can download the new song here.