Southern Charm cast member Kathryn Dennis last week faced backlash after sending a bombardment of social media direct messages – including one with a monkey emoji – to Mika Gadsden, a Charleston black activist and radio show host. The story surprised some fans of the reality TV show, but it probably shouldn’t have as similar incidents have happened before. Others took this as another opportunity to blast Southern Charm and one of its stars for not appropriately representing our city, but the sad truth is that they do.


Dennis apologized for her use of the monkey emoji, saying it was meant to imply “monkey business,” but its use was certainly “tone deaf and wrong.” At best, Dennis’s use of the emoji was woefully ignorant and insensitive and at worst, it was outright racist. No matter what you think about the incident, this type of behavior is certainly not new among reality TV stars. Hell, it’s not even unique to Southern Charm, whose cast has been called just about everything except diverse. 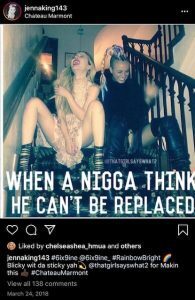 Jenna King, who was a main cast member in the show’s first season, has repeatedly used the n-word in several social media posts since at least 2014. Despite a handful of people calling her out for using the slur, the posts remain (as of this publishing), and you’d be hard pressed to find any media coverage. You’ll also find multiple people supporting King’s use of the word, much like some have defended Dennis’s use of the monkey emoji.

Speaking of Southern Charm’s first season, during the second episode, which aired in 2014, former cast member Thomas Ravenel, who is well-known for all sorts of boorish (and criminal) behavior, laughed off offensive comments from his father, former state senator and the namesake of Charleston’s most famous bridge, Arthur Ravenel, Jr.

During the episode, the pair are dining together when the elder Ravenel shares a few derogatory comments, including his advice for overcoming rejection from a woman – “Get her pregnant. And if it’s a boy child, I’ll give him $10,000.” Towards the end of the meal, Thomas asks his father to leave $5 for a tip. Arthur puts the money on the table and says he likes to get rid of the denomination because “they’s ole Lincoln.” Thomas asks, “You don’t like Lincoln?”. His father, an ardent defender of flying the Confederate Flag at the South Carolina Statehouse, slyly smiles at the camera.

Prior to appearing on Southern Charm, Arthur Ravenel notoriously “joked” in 1990 that some of his white colleagues operated on “black time.” Then, in 2000 he called the NAACP the “National Association for Retarded People” at a rally in support of keeping the Confederate flag flying in the statehouse dome. He refused to apologize to the organization and instead said he was sorry to “the retarded folks of the world for equating them to the national NAACP.” 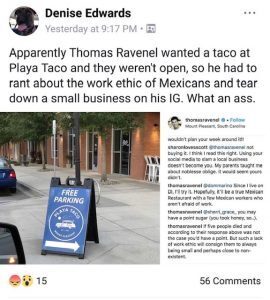 When it comes to the Ravenels, the apple doesn’t fall far from the tree. Thomas is notorious for deleting his offensive and embarrassing social media posts, but many of them were screenshot before he removed them. One such post was on his now defunct Instagram account. In 2018, he was upset that Playa Taco (formerly in Mt. Pleasant) was closed, so a follower recommended a different Mexican restaurant he could go to. Ravenel responded by saying: “Hopefully, it’ll be a true Mexican restaurant with a few Mexican workers who aren’t afraid to work.”

In 2016, Ravenel tweeted a response to some Twitter followers about his ex, the aforementioned Kathryn Dennis, saying: “She the hoe trying to fu&k my buddy’s 5′ Mexican groom. Disgusting hoe.”

I’m talking about racist comments in this post, but clearly a separate post could be made about the Ravenels’ misogyny too. This is another disgusting behavior that is prevalent in our city and country.

All of the incidents mentioned above happened in years past, but these types of comments and attitudes have not disappeared. They continue because many in the Charleston community (and across the country for that matter), turn a blind eye. We live in a society where people take to social media to attack celebrities, politicians, and complete strangers for completely inoffensive opinions, so why has some racist behavior been tolerated and ignored?

Dennis was rightfully criticized for what she did, but far too often people get a pass for this type of behavior. It’s not just celebrities, politicians, and people in power that tend to get away with racist or “racially-insensitive” comments and actions, it happens with plenty of “everyday people” in communities throughout the country. These actions continue because too many of us remain quiet and refuse to confront those in the wrong, which makes us complicit.

That includes me. I saw almost all of the comments mentioned, but said nothing on any of the Holy City Sinner platforms at the time. I failed, and I’m not alone in that failure. You won’t find much coverage – especially locally – about their comments.

Many in the Charleston community praise the city’s collective response after nine black people were murdered by a white supremacist at Mother Emanuel in 2015, – you’ve all heard or seen “Charleston Strong” in the years since the tragedy – but how strong or brave are we really if we don’t call out blatant racism or racist actions, words, or policies? None of us had any problem calling the attack at Mother Emanuel racist, but we say nothing when it comes to less extreme examples.

This is not meant to be a commentary on Southern Charm, as the actions of a few former cast members shouldn’t condemn an entire group. I’m discussing incidents related to show since it is filmed in Charleston and was brought into the national spotlight following last week’s incident involving Dennis. However, much like the community at-large has to do better at pointing a finger at racism, so do those associated with the show (the only cast member I saw directly call Dennis out was Naomie Olindo). Southern Charm is a microcosm of Charleston (and the entire country for that matter), and it demonstrates that we all have a lot of work to do.

This post could have easily been about several other institutions in Charleston or the state or the country – gentrification, the music scene, the whitewashing of the city’s history, people’s anger at the city officially apologizing for its role in slavery, restaurant’s cultural appropriation, the entire debate over the Confederate Flag, the lack of diversity in the city’s front-of-house restaurant staff, the statue of racist and white supremacist John C. Calhoun (an ancestor of Kathryn Dennis) still towering over Marion Square in direct view of Mother Emanuel, racial disparities and systemic racism in just about every category and industry imaginable, and on and on.

Reality TV shows are easy targets and people are not shy about sharing their feelings online. Southern Charm and its cast members are constantly made fun of and derided for being “bad for Charleston” (people say some pretty disgusting things to and about the cast). Look through social media and you’ll see the cast being blasted for any number of unimportant things that have occurred on the show. What you won’t find are enough people calling out the racist (or misogynist) comments mentioned above.

People are fond of saying that the show doesn’t represent the “real” Charleston and its residents, but I think if we really looked into the mirror, we would see it does. That will continue to be the case until we call out racist comments and demand better from the people that live in and represent our city. We may not be the one making these disgusting racist comments, but if we aren’t calling out those who do, we are part of the problem.