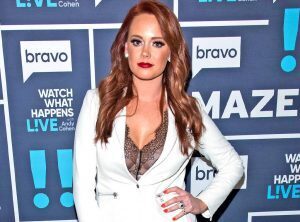 Over the past 24 hours, a Southern Charm cast member and a Mt. Pleasant nail salon issued separate apologies after each were accused of racism by members of the Charleston community. The connection to the Bravo reality TV show made this story go national, but the situation was the talk of Charleston social media circles well before it went viral.

For those who are lost, here’s a step-by-step rundown of what’s happened so far…
The situation began when Katie Shields, the owner of MylkBar Eco Nails + Beauty in Mt. Pleasant, on Saturday posted to her personal Instagram account that she and real estate agent Emery Macpherson were planning a “Trump Boat Parade.”
Paulina Rodriguez, whose products (Lina Rosa Jewelry) were for sale at MylkBar, reposted Shields’s Instagram story, saying she was cutting ties with the business owner for supporting Trump and organizing the parade, which she said was “a slap in the face to every single one of her (Shields’s) minority employees and friends.” Rodriguez added, “You are flat (out a) racist and greedy if you still support him.” Rodriguez did not tag or include Shields’s name, business, or identity in the post.
On Tuesday, Rodriguez said that her original post “was to inform my friends and patrons that they should re-evaluate which local businesses they’re giving their money to, seeing as those associated with Trump seem to turn a blind eye to the racial disparities within our city.”
After being alerted to Rodriguez’s post, Shields added a new post to her Instagram story asking her followers to direct message Rodriguez “and explain that supporting Trump does not make you racist.” Shields also said taking a screenshot from her “personal and private Instagram and putting it on a business page” was “stupid and unprofessional.”
According to Rodriguez, Shields texted her on Saturday evening saying, “You will be hearing from my lawyer for defamation of character. I am the least racist person there is. I dated a black man. One of my best friends, who was in my wedding, is black.” Another text said “Good fucking luck doing business in CHS again.”

As a result of Shields’s post, Rodriguez said she received “dozens of harassing and intimidating messages” from people in Shields’s social circle. The messages included one from Macpherson who said, “It’s hilarious that you think you’re better than those that voted for Trump. I guarantee you that I am smarter than you, more successful than you, and will always be several steps ahead of you…You are a nobody. MAGA” (see provided screenshots here and here).

Rodriguez told BuzzFeed News that Southern Charm star Kathryn Dennis was among the group of people who direct messaged her. She said Dennis tagged her in an Instagram story showing an old video of Dennis getting her nails done at MylkBar.

The direct messages prompted Rodriguez to reach out to Tamika Gadsden, a local activist (Charleston Activist Network) and radio show host, for help. Gadsden on Sunday shared what had been happening on her own social media pages saying, “In Charleston you learn, fairly quickly, that the face of White Supremacy resembles that of the boutique-owning, gatekeeping glitterati. This is Katie Shields…She’s organizing a Nautical MAGA rally with her friends. Katie is reprehensible.”

Gadsden’s post prompted Dennis to direct message her several times, saying things like, “Are you unaware of your absolutely sociopathic behavior,” “Ur legit what’s wrong with our city,” “Stop using Charleston and ur minority claim as a platform to harass people,” and the cryptic “You’ll learn.” Dennis also called Gadsden a “L 7 weenie” before saying “That’s how serious I take this” followed by a monkey emoji.

Gadsden told BuzzFeed News that she didn’t appreciate Dennis’s “name-calling and the use of racial tropes.”

Dennis on Monday issued a public apology on her social media pages and sent a personal one to Gadsden via direct message. Gadsden said Dennis told her the monkey emoji was meant to imply “monkey business,” but its use was “tone deaf and wrong.”

The added attention from Dennis, coupled with unrelated blow back from a social media interaction with a customer about re-opening the nail salon, and a barrage of negative messages, comments, and more, led MylkBar to make its Instagram account private on Monday evening.

The nail salon on Tuesday made their account public again and issued their own apology, which you can see here and below: 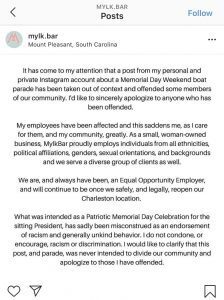 Rodriguez issued her own statement on Tuesday, which you can see here and here.

Surely, much more has been said in other direct messages and offline, but those are details that have become public thus far. Aside from their public apologies, neither Dennis nor Shields have spoken to the press or commented about the situation.

The screenshots included in this post were provided by multiple people. Any commentary on the images, was not added by this website.