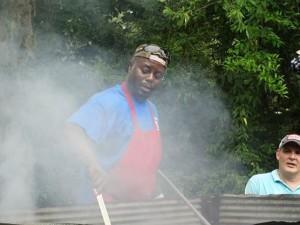 Scott currently owns restaurants in Charleston and Birmingham, Alabama. The pitmaster is planning to open an Atlanta location this year. The precursor to the pitmaster’s growing empire is Scott’s Bar-B-Que, his family’s convenience store and eatery in Hemingway, South Carolina. He won the James Beard Award for Best Chef: Southeast in 2018.


Each year, the Barbecue Hall of Fame has the honor of inducting three individuals that have impacted the world of BBQ. For a full calendar year, nominations for this honor are sent in from individuals throughout the world and this year, there were over 60 individuals included in the nomination process.

The three 2020 Hall of Fame Inductees will be announced on Wednesday, May 27, 2020. The Barbecue Hall of Fame Induction ceremony and events will take place during the 41st American Royal World Series of Barbecue held at the Kansas Speedway from September 18 – 20, 2020.

About the American Royal Association

Woven through the history of Kansas City since 1899, the American Royal provides opportunities for youth and adults from around the country to compete in our Livestock Show, ProRodeo, Horse Shows, and the World Series of Barbecue®. These events allow the American Royal, a 501 (c) (3) not-for-profit organization, to give over $1 million annually for youth scholarships and support agriculture education programs. Last year, more than 22,000 youth were impacted through their educational mission. To learn more about the American Royal visit AmericanRoyal.com.