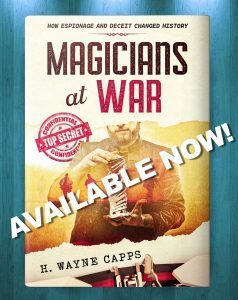 Howard Blackwell, the owner and resident magician at Holy City Magic, has released a new book called Magicians at War – How Espionage and Deceit Changed History.

Blackwell is a professional corporate and theater magician and a reserve military officer with 27years of service. In Magicians at War – How Espionage and Deceit Changed History, Blackwell’s two worlds collide as he takes an in-depth look at magicians of the past who have used their skill of deceit and misdirection to serve the nation they love.

Was Houdini a spy? Was WWII stopped by a single card trick? Does the CIA use magicians in the field? These are just some of the questions answered in Magicians at War, along with some of the most amazing war stories ever told!

To purchase the book, visit: www.MagiciansAtWar.com.