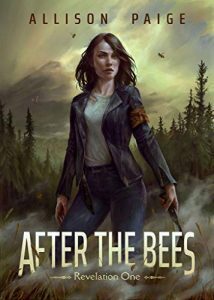 Local photographer and author Allison Paige recently self published her debut book, After The Bees, a dark fantasy novel set in the future after the last of the bees disappear.

The novel is described on Amazon as follows:

It starts when the bees die and a plague sweeps across the Earth. The immune survive only to face a greater horror: a demon-ruled world where mankind is either marked or possessed.

But Leah survives. For three years, she lives on her own after fleeing the fall of her city until she meets Raum, a demon who keeps her alive and unmarked. Uncertain of his motives, she follows him to Babel, even though she knows his intentions are anything but good.

When Leah is stolen from Raum, she discovers the outside world is not what it once was, and perhaps hope for mankind is not lost. But with new hope comes consequences, and she’ll have to face a nightmare far greater than anything she’s ever faced before.

Paige says she is planning to hold a release party at The Purple Buffalo on Thursday, June 4th. The plan is to have a DJ, drinks, books for purchase, and more. Click here for details.
Partial proceeds of the book will be donated to The Bee Cause (TheBeeCause.org) in order to help raise awareness for the importance of bees.

Follow us
Related Topics:Allison PaigeThe Bee Cause Project
Up Next

Proceeds from Charleston Artist’s Custom Vans to Benefit The Alley