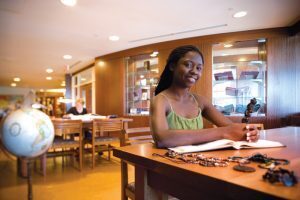 Although African American students make up just a little over 50 years of the College of Charleston’s 250-year official history, in reality the black community’s ties with CofC go back to the beginning. Not only did enslaved people help build some of the first buildings on campus, their forced labor helped generate the wealth of plantation owners who made donations to fund the start of the College. And with the skills they brought here in medicine, art, teaching, cooking and many other areas, African Americans contributed to the Charleston community at large and are a big part of its heritage.

It’s only fitting, then, that the 1967 Legacy Program (named after the year the College integrated) is one of the 10 priorities of the Drive for the 250th – the College’s anniversary philanthropic effort that launched this year. With a fundraising goal of $1.2 million, the 1967 Legacy Program is a multi-year initiative that aims to improve the recruitment, retention, graduation and workplace success of African American students through scholarships, enhanced and extended education support, and professional preparation, as well as research experiences around African Americans’ contribution to the College.

“This is the College of Charleston’s story, not just the African American story,” says Valerie Frazier ’91, an associate professor of English and member of the Black Alumni Council who will have a key advisory role in the program. “That’s one thing we’ve seen with College of Charleston President [Andrew] Hsu, that he’s not shied away from telling it. In almost every speech that he’s given, he’s talked about trying to deal with that pain, acknowledging it but still moving on and embracing the whole legacy of the College.”

With a full-time director, a dedicated gathering space on campus and alumni mentoring, the program will focus on African American student attendance and matriculation. Each Legacy Scholar will receive $10,000 ($5,000 for tuition and $5,000 for resources) and participate in a prestigious, four-year platform of academic, personal and career-ready enrichment to become the next generation of African American leaders. The goal is to have 10 students, two of whom will be Sankofa Scholars from West Africa, and another from the Gullah Geechee Cultural Heritage Corridor that extends from Wilmington, North Carolina, to Jacksonville, Florida.

Personalized enrichment activities, like study abroad courses, and networking and internship opportunities, will help students thrive pre- and post-graduation. Perhaps more than anything, the College wants to make sure the students feel a true sense of belonging.

“It’s about fitting in,” says CofC’s Chief Diversity Officer Rénard Harris. “It’s one thing is to recruit and get them here, but the other is feeling at home here. We want to make sure the students feel comfortable with the right financial, emotional and relationship support – all those things that a human being needs to feel full and complete when he or she is existing in space for four, five, six years. It’s a healthy thing.”

One of those providing financial support to the program is the Charleston law firm of Willoughby & Hoefer.

“Willoughby & Hoefer contributed to the 1967 Legacy Program to support the initiatives of improving the recruitment, retention and graduation of African American students at the College,” says partner Randy Lowell ’95, who is a member of the College’s Board of Trustees. “We recognize the importance of diversity on campus and in the community at large and wanted to demonstrate our support for this program.”

Connecting the present to the past will be a key part of the program, too, so the scholars will get involved in historical research projects promoting awareness about the African American story and the people who came before them. Students will do this through the Avery Research Center for African American History and Culture, the Center for the Study of Slavery in Charleston and the International African American Museum. And that story is not just about the integration of the College, but the whole African diaspora in the region – real people who were doctors, teachers, artists, mothers and fathers, among many other things.

“It’s carrying the legacy of those Africans who were brought here to support this institution, to build this institution,” says Charissa Owens, director of diversity education and training in the Office of Institutional Diversity. “We don’t want them to see slavery only as the horrific experience because we understand that. We also want to put a lens on their strength, their resiliency, their intelligence and ingenuity. Many of these individuals had skill sets that continue to permeate our community to this very day.”

And the 1967 Legacy Program, which will launch in the fall of 2021, couldn’t tie in better to Hsu’s philosophy of tradition and transformation.

“This project is not supposed to be the same old same old,” says Harris. “It’s pretty innovative to play in this space. It’s very exciting. For me, it’s about identity and purpose. There’s a real sense of ownership and empowerment. These 10 students get to tell their own story and how you should engage with them as opposed to someone telling them how they should engage. They take complete control, and that’s the beauty of life.”

That sense of ownership and empowerment was on display last December when 15 black medical students from Tulane University posed in white doctor coats in front of slave quarters at the Whitney Plantation in Louisiana. The social media posts with the caption “We are our ancestors’ wildest dreams” went viral.

“That encapsulates a little bit of what we want our students to feel,” says Frazier. “There’s an emotional component in terms of how people see this legacy being built, and this program is one major step in that direction here at the College.”

Association for the Blind Expands Virtual and Online Training