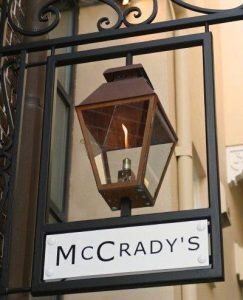 The Neighborhood Dining Group today announced that McCrady’s and the downtown location of Minero will not reopen when South Carolina restaurants are allowed to do so. The group’s other restaurants – Husk and Delaney Oyster House – are expected to return. There are also still plans for to open a new Minero location on Johns Island.


The Neighborhood Dining Group released the following statement from their president, David Howard:

“The past couple of months have presented unparalleled challenges to our beloved restaurant community. As we look towards the future of our restaurant operations post-crisis, we’ve been proactively evaluating each of our restaurants to determine how they will fit into the new reality we anticipate for the F&B industry. Through many tough conversations as the crisis has unfolded, we’ve come to the difficult decision that McCrady’s, a tasting-menu-only restaurant with few seats in an intimate setting, will no longer be viable in this changed business environment with restrictions on seating capacity. We are sad to announce that McCrady’s will not be reopening. This has also led us to the decision to discontinue service at our downtown location of Minero (located above McCrady’s) and instead focus efforts on our forthcoming location on Johns Island with expanded menu offerings, a large bar, curbside pickup, and outdoor seating. Our valued staff at these locations were laid off at the start of the virus crisis and are already receiving unemployment benefits.

We’re so grateful for the many wonderful years we’ve spent on East Bay Street and would like to extend the sincerest appreciation to our neighbors, Charleston community, and visitors who have dined with us over the years. It’s been a true honor.

We look forward to welcoming you back to Husk and Delaney Oyster House as soon as we’re able and are excited for our next chapter for Minero on Johns Island.”

McCrady’s has been a downtown staple for generations. One of the property’s claims to fame was President George Washington’s visit in 1791. The building was added to the National Register of Historic Places in 1982. More recently, it had the honor of earning a AAA Five-Diamond Award, the only South Carolina restaurant with that distinction, and one of only 68 in America.

Minero was a casual Mexican eatery that opened in 2014.