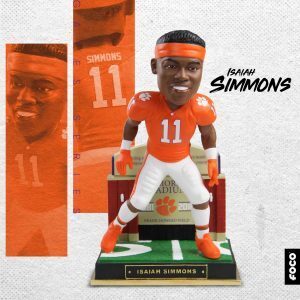 The Isaiah Simmons Clemson Tigers Gates Series Bobblehead depicts Simmons in an action pose while wearing his college uniform in front of a 3-D backdrop modeled after his college stadium. The bobblehead also features a field-textured top of base and a front name display.

Simmons enjoyed a strong career with the Clemson Tigers. After redshirting as a freshman, Simmons first saw significant playing time in 2017, appearing in 14 games. Simmons began to gain national attention in 2018, totaling 89 tackles for the Tigers’ national championship team. Simmons continued to dazzle as a redshirt junior in 2019, tallying 104 tackles and seven sacks as Clemson went to its second straight national championship game.

Simmons was named a unanimous All-American and ACC Defensive Player of the Year. While he saw most of his playing time at linebacker, even winning the Butkus Award given to the nation’s best linebacker in 2019, Simmons has been praised for his versatility, seeing snaps at defensive end, cornerback, and safety in addition to linebacker. Simmons opted to forgo his senior season to enter the 2020 NFL Draft, where he was selected eighth overall by the Arizona Cardinals.

This bobblehead is handcrafted to depict a college football star that fans will remember for years to come. It stands approximately eight inches tall, making this the ideal addition to any collection at home, or any desk at work or school.

“Simmons was an electrifying piece of the defense that helped lead Clemson to back-to-back championship games,” Matthew Katz, Senior Licensing Manager at FOCO, said. “Simmons will always be remembered by the Tiger faithful for his versatility and playmaking ability, so we think Clemson fans will be eager to add this limited edition bobblehead to their collections.”

The Isaiah Simmons Clemson Tigers Gates Series Bobblehead is available for pre-order at this link now for $40. The projected delivery date to customers is in August.

FOCO is a leading manufacturer of sports and entertainment merchandise celebrating more than 20 years in the industry. The company’s always-growing product lines includes apparel, accessories, toys, collectibles, novelty items, and more. FOCO is licensed with all major sports leagues including the NFL, MLB, NBA, NHL, NASCAR, MLS and over 100 colleges and universities as well as entertainment properties such as Disney, Warner Bros/DC Comics, Nickelodeon, Sanrio and WWE.

Best Day Trips to Take Near Charleston with You & Your Dog