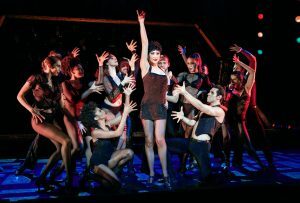 While the Charleston Gaillard Center has missed seeing our theater full for the final performances of the 2019-2020 Season, we know temporarily closing the Martha and John M. Rivers Performance Hall doors was the right decision. While our curtains have been drawn, we have been hard at work preparing for new performances to take our stage.

With so much happening in our community, we debated the appropriate time to share our 2020-2021 Series, and indeed, delayed our annual announcement. However, we know that like us, the Lowcountry arts lovers take tremendous delight in live performance, the thrill of music enveloping them. We hope that by announcing our upcoming series now, our patrons find joy in looking forward to ten sensational performances, including two Lowcountry Broadway premieres and the return of sold-out artists, back by popular demand.

AN EVENING WITH AUDRA MCDONALD

Audra McDonald performs her trademark mix of songs from Broadway, the Great American Songbook, and beyond.

Audra McDonald is unparalleled in the breadth and versatility of her artistry as both a singer and an actor. The winner of a record-breaking six Tony® Awards, two Grammy® Awards, and an Emmy Award, she received a 2015 National Medal of Arts from President Barack Obama and was also named one of Time magazine’s 100 most influential people that year. Tony-winning performances include Carousel, Master Class, Ragtime, A Raisin in the Sun, The Gershwins’ Porgy and Bess, and Lady Day at Emerson’s Bar & Grill – which served as the vehicle for her Olivier-nominated 2017 West End debut. On television, McDonald is known for her roles in ABC’s Private Practice and NBC’s The Sound of Music Live!, and she won an Emmy as the official host of PBS’s Live From Lincoln Center. She returned to Broadway in summer 2019 to star opposite Michael Shannon in Frankie and Johnny in the Clair de Lune and can currently be seen as Liz Lawrence on CBS All Access’s The Good Fight. Recent film credits include Ricki and the Flash, Disney’s live-action Beauty and the Beast, the movie-musical Hello Again, and MGM’s forthcoming Aretha Franklin biopic, Respect. The Juilliard-trained soprano also maintains a major career as a concert and recording artist. Her latest solo album, Sing Happy, was recorded live with the New York Philharmonic for Decca Gold. Of all her many roles, her favorites are the ones performed offstage: passionate advocate for equal rights and homeless youth, wife to actor Will Swenson, and mother.

CHICAGO has everything that makes Broadway great: a universal tale of fame, fortune and all that jazz; one show-stopping song after another; and the most astonishing dancing you’ve ever seen.  It’s no surprise that CHICAGO has wowed audiences from Mexico City to Moscow, from Sao Paulo to South Africa. And now it’s coming to your town!

Come on, babe! Head to CHICAGO! We’re hotter than ever.

Beautiful – The Carole King Musical tells the inspiring true story of King’s remarkable rise to stardom, from being part of a hit songwriting team with her husband Gerry Goffin, to her relationship with fellow writers and best friends Cynthia Weil and Barry Mann, to becoming one of the most successful solo acts in popular music history. Along the way, she made more than beautiful music, she wrote the soundtrack to a generation.

Featuring a stunning array of beloved songs written by Gerry Goffin/Carole King and Barry Mann/Cynthia Weil, including “I Feel The Earth Move,” “One Fine Day,” “(You Make Me Feel Like) A Natural Woman,” “You’ve Got A Friend” and the title song, BEAUTIFUL has a book by Tony® Award-nominee and Academy® Award-nominated writer Douglas McGrath, direction by Marc Bruni, choreography by Josh Prince, and took home two 2014 Tony® Awards and a 2015 Grammy® Award.

Meet Jenna, a waitress and expert pie-maker who dreams of a way out of her small town and rocky marriage. Pouring her heart into her pies, she crafts desserts that mirror her topsy-turvy life such as “The Key (Lime) to Happiness Pie” and “Betrayed By My Eggs Pie.” When a baking contest in a nearby county — and a satisfying encounter with someone new — show Jenna a chance at a fresh start, she must find the courage to seize it. Change is on the menu, as long as Jenna can write her own perfectly personal recipe for happiness.

“WAITRESS is a little slice of heaven!” says Entertainment Weekly, and is “sweet, sassy and passionate,” according to New York Magazine.

“It’s an empowering musical of the highest order!” raves the Chicago Tribune.  Don’t miss this uplifting and hilarious musical celebrating friendship, motherhood, and the magic of a well-made pie.

Truly great dance can be a window to the heart and soul, revealing our deepest selves. Let the dancers of Alvin Ailey American Dance Theater take you on a path of discovery. They’ll show you themselves through their movement and help you see yourself in their stories. Using the universal language of dance as a medium for honoring the past, celebrating the present and fearlessly reaching into the future, the Ailey company has performed for an estimated 25 million people around the world. This mixed repertory program will feature new and classic works, including the beloved Ailey masterpiece Revelations. Using African American spirituals, song-sermons, gospel songs and holy blues, Revelations fervently explores the places of deepest grief and holiest joy in the soul. Whether you’ve seen Ailey before or this is your first experience, you’re sure to experience something new.

She was a girl from Boston with a voice from heaven, who shot through the stars from gospel choir to dance floor diva. But what the world didn’t know was how Donna Summer risked it all to break through barriers, becoming the icon of an era and the inspiration for every music diva who followed.  With a score featuring more than 20 of Summer’s classic hits including “Love to Love You Baby,” “Bad Girls” and “Hot Stuff,” this electric experience is a moving tribute to the voice of a generation.

ACADEMY OF ST MARTIN IN THE FIELDS

The Academy of St Martin in the Fields is one of the world’s finest chamber orchestras, renowned for fresh, brilliant interpretations of the world’s greatest orchestral music.

Formed by Sir Neville Marriner in 1958 from a group of leading London musicians, the Academy gave its first performance in its namesake church in November 1959. Through unrivalled live performances and a vast recording output—highlights of which include the 1969 best-seller Vivaldi’s Four Seasons and the soundtrack to the Oscar-winning film Amadeus—the Academy quickly gained an enviable international reputation for its distinctive, polished and refined sound. With over 500 releases in a much-vaunted discography and a comprehensive international touring program, the name and sound of Academy is known and loved by classical audiences throughout the world.

For more than three decades, Jean-Yves Thibaudet has performed world-wide, recorded more than 50 albums, and built a reputation as one of today’s finest pianists. From the very start of his career, he delighted in music beyond the standard repertoire, from jazz to opera, which he transcribed himself to play on the piano. His profound professional friendships crisscross the globe and have led to spontaneous and fruitful collaborations in film, fashion, and visual art.

AN OFFICER AND A GENTLEMAN

AN OFFICER AND A GENTLEMAN, based on the Oscar-winning film starring Richard Gere, is a breathtaking production that celebrates triumph over adversity and includes one of the most iconic and romantic endings ever portrayed on screen. Featuring the Grammy® Award winning, #1 hit single “Up Where We Belong”, and a score based on the 1980’s catalogue of music that gave voice to a generation, the live stage production is a new adaptation by multiple Tony® Awards nominee Dick Scanlan (Thoroughly Modern Millie, Everyday Rapture), based on the original screenplay by Douglas Day Stewart. The musical is directed by Scanlan with choreography by Patricia Wilcox (Motown, A Night with Janis Joplin).

Zack Mayo’s got smarts and a body built for US Navy pilot boot camp, but he also has too much swagger… until he meets a drill sergeant who’s determined to drill his arrogance out of him. Zack finds comfort in the arms of a local factory girl. But it isn’t until tragedy befalls a fellow candidate that Zack learns the importance of love and friendship, and finds the courage to be his best self and win the heart of the woman he loves. A sweeping romance that lifts you up where you belong.

Our Series Subscription allows you to choose what you see, when you want to see it. Choose the exact shows you want with our “Make Your Own Series” Subscription. Choose four, six, eight or more shows, and save up to 25% off of regular season, single ticket prices.