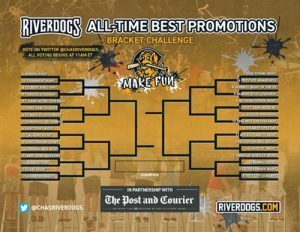 The Charleston RiverDogs unveiled today on Twitter an All-Time Promotional Night Bracket in which fans will vote for their all-time favorite promotion. Voting for each round will begin Tuesday and continue daily at 11 am on the RiverDogs’ Twitter page, where fans will choose from 32 of the RiverDogs’ zaniest promotional events.
The bracket challenge, which is being released and presented in conjunction with The Post and Courier – which has covered nearly every one of the promotional nights – features two 16-team halves: one with “recent” promotions from the past six years, and one with “classics” dating as far back as the inception of the RiverDogs in 1994. Many of the promotional themes are the brainchildren of longtime RiverDogs president Mike Veeck and other members of the RiverDogs staff. Many of those staff members, including Veeck, longtime general manager Dave Echols, promotions director Nate Kurant, and at least three past promotions directors, will share their recollection of the events through a series of content shared on RiverDogs social media.
“We wish Nate and the team were spending this time adding to the list of all-time best promotions,” said RiverDogs president and general manager Dave Echols. “However, since we cannot do that, we thought it would be fun to use this time to celebrate some of the best from the past.”
The seeded bracket is topped by nationally acclaimed promotions like Nobody Night, Go Back to Ohio Night, and Silent Night, and also features recent headliners like Silly String Night and Helen McGuckin Night, a finalist for Minor League Baseball’s 2019 Promotion of the Year.
“The obviousness of Nobody Night, Silent Night and an All-Star Game home run contest held on the deck of the Yorktown. The subtle beauty of National Laundry Day. A nation coming together every four years along the Ashley River for Bobblections. Alas, my only disappointment is that this is not a 64-promotion bracket,” said Gene Sapakoff, the longtime columnist at The Post and Courier.
To vote, fans should look to the RiverDogs’ Twitter page every morning Monday through Friday at 11 a.m. ET.

The Latest on the RiverDogs
The health and safety of RiverDogs fans and employees is of the utmost importance to the organization and we support Minor League Baseball’s decision to delay the start of the 2020 season in an effort to reduce the spread of the coronavirus (COVID-19). This is a fluid, rapidly evolving situation and we are taking all necessary measures to ensure that our facilities are following the recommendations set forth by local, state and national officials. At this time, the RiverDogs remain unsure as to what extent this delay will have on our season. RiverDogs season tickets, partial season plans, and group tickets, including options to the Segra Club at Riley Park, are now available for the 2020 campaign at riverdogs.com/tickets. A full schedule and list of game times for the 2020 season is also available at riverdogs.com.

Will a Golf Watch Actually Lower Your Score