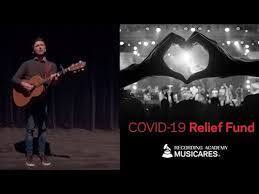 As musicians in quarantine continue to do their part to give back, Jump, Little Children’s Jay Clifford teamed up with the band’s historic hometown venue, the Charleston Music Hall, to film a stripped back version of the band’s celebrated 1999 single “Cathedrals” using a 360-degree camera (see below).

In the clip, Clifford is entirely alone as his voice echoes throughout the empty venue – an eerie and emotional reminder of the impact this global pandemic has had on the music industry.

“Venues like the Charleston Music Hall are sacred to me,” Clifford said. “Singing ‘Cathedrals’ in the empty theater was an otherworldly and surreal experience, one that I will never forget.”

Along with the 360-degree video, which is available to watch below, the band is asking fans and anyone who is able to donate to the MusiCares COVID-19 Relief Fund. MusiCares has been a part of the Jump, Little Children story throughout the last two-and-a-half-decades, with the band fundraising and donating monies throughout the years. Clifford and the rest of the band wanted to raise awareness for the music community struggling through this crisis, and hope to raise funds for MusiCares who are working tirelessly to help musicians and music industry professionals directed impacted.