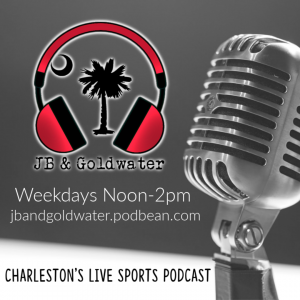 The COVID-19 pandemic may have paused national and international sports, but that isn’t stopping Jamie Bradford and Darren Goldwater from launching Charleston’s only live daily sports podcast, JB & Goldwater on Monday, April 13, 2020.

This live and interactive call-in podcast will air weekdays from noon to 2 pm on the Podbean app and their website, JBandGoldwater.Podbean.com, and can also be downloaded from Apple Podcast, Spotify, iHeart podcasts, Google Play, and more podcast platforms. Listeners are encouraged to download the Podbean app to call in to the show live.

Accomplished television play-by-play announcer Darren Goldwater, a graduate of Penn State University, arrived in Charleston in 2002 for a position with the Charleston Riverdogs. He moved on to become producer and co-host of FanTalk with legendary host Bobby Hartin on ESPN radio 910AM. After being the voice of The Citadel Bulldogs for more than five years, he became the television play-by-play announcer for the Southern Conference. He currently is a national television announcer with networks such as CBS Sports Network, ESPN and its sister networks, the NCAA, and more.

Charleston native Jamie Bradford is a graduate of the University of South Carolina and has experience in all aspects of radio production; both in front of the mic and behind the scenes. He hosted his own show – The JB Show – on ESPN Radio 98.9 weekdays and co-hosted Carolina Gameday for more than five years.