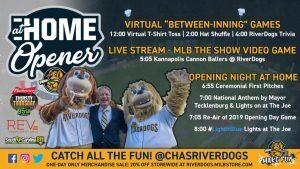 Prior to the outbreak of COVID-19, the Charleston RiverDogs were scheduled to open their season on Thursday, April 9th at The Joe. As the ballclub awaits a new Opening Day, it will tonight bring a flair of Opening Day to the Charleston community, including lighting the ballpark for a time in the evening, and a special merchandise deal.
The RiverDogs will turn on the ballpark’s brand new LED stadium lights at 7:05 pm, the scheduled first pitch for the would-be opener. And then, at 8 pm, as part of a nationwide project called #LightItBlue, The Joe’s light poles will shine in blue for one hour. Light It Blue is organized by volunteers from the entertainment and events industry and is lining up as many major landmarks and electronic signs across the United States to be lit in blue to show support of all healthcare, front-line and essential workers around the country.
“We consider the ballpark to be a beacon and a gathering-place for the community,” RiverDogs president and general manager Dave Echols, said. “Even though we can’t have a traditional Opening Day, we want to remind the community that working together now will mean a return to baseball and other normal activities, hopefully very soon.”
The in-stadium spectacle is one of many ways for the Charleston community to engage with the RiverDogs on the would-be Opening Night, a scheduled Budweiser Thirsty Thursday. Through its social media channels – @chasriverdogs – the RiverDogs have a full slate lined up for Thursday, including:
Also on Thursday, as on all other Tuesdays-Fridays for the foreseeable future, fans can order and pick up their favorite ballpark food favorites through the “To Go from The Joe” platform. Online orders can be placed and more information can be found at https://www.milb.com/charleston/ballpark/drive-thru. Lunches are being prepared in the Segra Club at Riley Park kitchen by Josh Shea, the RiverDogs VP of Food & Beverage, and are available from 11 am to 2 pm Tuesday through Friday. Kids Meals come with RiverDogs baseball cards, and all meal orders include two free RiverDogs ticket vouchers, good for any game in the 2020 season.
And the team is offering a one-day-only Opening Day 20% OFF storewide merchandise deal through its online store at http://riverdogs.milbstore.com.