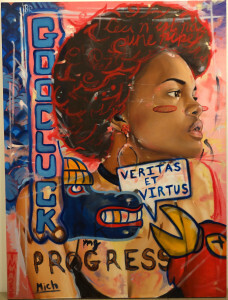 For more than three decades, budding artists have proudly displayed their work across a variety of mediums from photography and sculpture to painting and prints at the annual Young Contemporaries exhibition at the College of Charleston’s Halsey Institute of Contemporary Art.

Now in its 35th year, the Young Contemporaries competition faced a new challenge ahead of the exhibit’s opening on March 27, 2020: How to share the students’ work in a virtual space instead of a traditional art gallery. The Halsey was forced to make the shift amid the College’s move to online learning due to the coronavirus pandemic.

“Once we realized that we wouldn’t be able to have the Young Contemporaries exhibition, we wanted to find another way to do it,” says Bryan Granger, director of exhibitions and public programs for the Halsey. “It’s an important show for us as it showcases some of the amazing work the students are doing at the College. As the rest of the world is turning to virtual options, we decided to create a virtual exhibition that would help recognize the students who are a part of this year’s Young Contemporaries.”

Granger used Art Steps, a web-based environment that allows its members to create virtual art galleries in lifelike 3D spaces. With this tool, he was able to move works around within the virtual space and see how different groupings of works responded to each other. While it’s been a great tool for curatorial purposes, he says there’s no true replacement for seeing works of art in real life. An upside of this online format, though, is that the exhibition can be viewed by a larger community.

“For instance, many students invite their parents to the opening, but not all can make it. With this virtual show, families and friends can view the exhibition just like anyone else,” says Granger. “We can reach people who have never heard of the Halsey or who are not familiar with contemporary art spaces. Hopefully we can continue to use tools like these even after the pandemic to connect our audiences with adventurous artists and ideas.”

This year’s juror for Young Contemporaries was artist Melanie Daniel, who says one of the most challenging tasks asked of art professionals is to jury a show.

“I looked for creativity in its purest form, free from derivation; a sense of inventiveness and original thinking,” says Daniel. “I also looked for a developed sensitivity in material handling, which is not necessarily the same thing as technical ability. Other artworks stood out as they took a critical stance in relation to the culture at large.”

Concurrent with Young Contemporaries is the Salon des Refusés exhibition, with works chosen by Studio Art faculty from pieces that were not selected for Young Contemporaries, and prizes juried by local artist and educator Joe Walters. A virtual exhibit for those pieces has also been created.

Senior studio art and accounting double major Jessi Davidson had six works accepted into Young Contemporaries that were inspired by tarot cards. She won best in printmaking for her piece, “The Emperor.”

“A big part of creating the portraits is the process of painting, which includes coming in, having coffee and spending two to three hours painting someone I care about, while we have a conversation. I feel like it helps me more accurately depict the relationship that already exists.”

This is Davidson’s fourth year getting into Young Contemporaries. Missing out on the award ceremony and the opportunity to exhibit her work in the physical gallery was disappointing. However, on the positive side, she’s found another way to express her creativity.

“I’m really into the game Animal Crossing, and I’ve been uploading and editing my work and editing to mimic the original piece, and it’s been a lot of fun,” she says. “I think I’ll host an online exhibition for my friends so we can celebrate and still participate in social distancing.”

Tim Hunter, a junior double-majoring in studio art and chemistry, submitted an oil painting titled, “Instant Strawberry Separation by Way of Vacuum Filtration.” He agrees that the process of painting is rewarding.

“Days when I felt stressed, I would add an aspect to this painting, whether it be the characters, patterns or paint marks,” says Hunter. “Coming back and forth over a period of weeks and adding to the painting without thinking about the grand picture allowed me to find an enjoyment in art that I had not known before.”

The enjoyment of art is something we all can benefit from, now more than ever. These exhibitions can be viewed online through April 25, 2020.