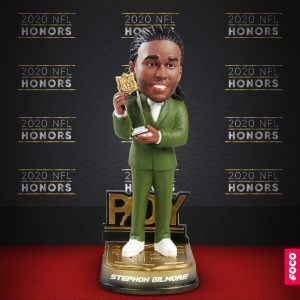 Gilmore enjoyed an electric 2019 NFL season that saw him record six interceptions and 20 passes defended, both league-highs. He also recorded two pick-sixes and 53 total tackles. Gilmore was named to his third Pro Bowl and earned his second-straight first-team All-Pro nod, helping the Patriots finish with a 12-4 record and the AFC North crown.

This bobblehead stands approximately eight inches tall, making this the ideal addition to any collection at home, or any desk at work or school.

This bobblehead is available online at www.foco.com, FOCO’s official direct-to-consumer website. The product is available for pre-order at this link now for $50. The projected delivery date to customers is in July.

RiverDogs ‘Take Out from The Joe’ Drive Thru Begins Thursday

Local Company Launches “Tips in the Jar” for F&B Workers