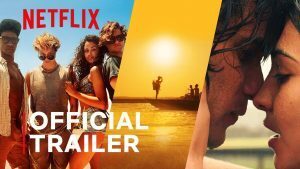 Netflix today released the first trailer for Outer Banks, a 10-episode young adult drama series that was filmed in the Charleston area.


The show, described by the network as “a coming-of-age story that follows a tight-knit group of local teens (aka The Pogues) in the Outer Banks of North Carolina,” will premiere on April 15th.

When a hurricane kills the power for the summer season, it sets off a chain of illicit events that force the friends to make life-altering decisions. The search for their ringleader’s missing father, forbidden romances, a high-stakes treasure hunt, and the escalating conflict between the Pogues and their rivals turn their summer into one filled with mystery and adventure they’ll never forget.

Wilmington resident Jonas Pate served as the writer and director for the show. He reportedly wanted to film the series in his hometown of Wilmington, but remnants of North Carolina’s House Bill 2 “that live on in its 2017 replacement, HB 142, including a clause that, until 2020, prevented local governments from enacting nondiscrimination ordinances protecting any group not already protected by state law—including LGBTQ people,” bothered Netflix, so the production came to Charleston instead.

You can watch the trailer below:
–