How VR Technology Has Been Implemented in Theme Parks

There are many different ways in which a ride can be themed. The station and vehicles can be designed to fit the theme, as can the track and various things you encounter as you ride, such as static and kinetic props, video screens, live actors, sound effects and even smells.

Bare-bones rides with no theming at all can still be exciting. However, themed rides can have the edge, since they offer more than a standard ride experience. The more theming there is, the more immersive a ride experience you get. When going on a ride that’s really well themed; you’re not just going on a ride and moving about, you’re learning stories, discovering characters and entering new worlds.

So where does VR technology come in? Instead of using physical theming to enhance the ride experience, a number of theme park operators have experimented with this technology instead. On so-called VR rides, you wear a special VR helmet that completely immerses you in a brand new setting.

Once you’ve boarded the ride vehicle and strapped yourself in, you put on the VR helmet. As you ride, you watch a film that’s typically action-packed and thrilling – it could involve a high-speed car chase in a city, for example or you may play free casino slot games for fun. The film’s specially designed to match the movements of the ride. So, as you’re going down a drop on a roller coaster, the film will have a drop sequence at the exact same time.

VR technology started being implemented in theme parks in late 2015, before taking off in 2016. One of the first rides to open with this technology fully and permanently implemented was Galactica at Alton Towers. This flying roller coaster has rides positioned horizontally beneath the track to make them feel as if they’re flying. Put the Samsung Gear VR helmet on, and as you ride, you travel throughout the universe, visiting several different planets in the process. 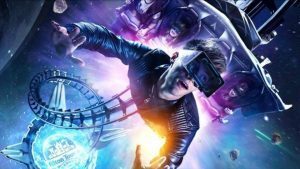 Most of the rides that have VR helmets available to use (they’re nearly always optional so people can still experience the ‘classic’ real-world version of the ride) are roller coasters. Some other types of the ride have used these helmets too. You can try them at https://slotmine.com/. A good example is the drop tower Zumanjaro: Drop of Doom at Six Flags Great Adventure. This ride takes you up 415 feet and drops you back down – it’s the tallest of its kind in the world. Put the VR helmet on, and as you ride, you’re rising up above a large city fighting off large insect-like creatures and robots that are attacking you. Then, when the actual ride plummets back down to Earth, the film has you fall back down to Earth, only to get attacked by an overly large spider.

Over the last few years, lots of theme park operators have jumped on the VR bandwagon. Pretty much every operator that has done so has added the option of VR to just one ride. Even though quite a few parks across the world have dabbled with this technology, it’s safe to say it’s been a failure. A growing number of parks have removed the VR option from rides. Galactica, for example, had VR available on every seat for the 2016 and 2017 seasons. Then in 2018, VR was only available in the last three rows of each train, before being removed altogether for the 2019 season onwards.

There are nearly 50 rides that have had VR experiences added. However, at least half a dozen have removed the VR technology, and it wasn’t added to any rides at all in the 2019 season. Throughout 2016 and 2017, it was added to dozens of rides, though in 2018 the number of rides it was added to was far smaller. So far, no rides are expected to add this technology in 2020.

From this, it seems that VR technology in theme parks has been something of a fad. While people no doubt enjoy the way it enhances the ride experience, it’s clear that it’s surpassed its peak.

So why has it ‘failed’? The main reason is that it significantly slows down the loading process. Queues at theme parks can be long enough and having them slowed down any more isn’t going to please anyone. Normally, you would get on a ride, strap yourself in, have an attendant check your restraints, then the ride’s given the go-ahead to operate. For rides with VR, in addition to all this, people who want the VR experience have to faff about getting the helmet to fit securely, adjust the settings so they can see properly and make sure it’s strapped on. Attendants also have to wipe down the inside screens for health and safety reasons.

VR Technology was a big new craze, but the hype died down once operators saw just how cumbersome it was to set this technology up on rides. Many have realised that it’s not worth the long wait times or the cost.

Can This Technology Succeed in Other Areas?

In reality, using VR on theme park rides isn’t too practical. But that doesn’t mean the technology can’t be used effectively in other areas. One area where it’s bound to succeed is the online gambling industry. If you don’t want to visit a casino, put your VR helmet on, and it simulates the experience of physically being in a casino – you can also play games and win real money. Other areas such as gaming, healthcare and marketing still have benefits of this technology. It may have reached its peak in the theme park world, but there’s still plenty of mileage left in it.

How online gambling can be fun if done the right way

Best Coffee Shops In Charleston You Must Know About