“In light of the spread of the novel coronavirus, or COVID-19, The Taylor Music Group has decided to cancel the upcoming St. Patrick’s Celebration Variety Show Concert on Sunday, March 15 at Circular Congregational Church. We feel it’s important to take this measure in order to ensure the health and safety of our audience and artists and to minimize contact with large groups in order to protect the most vulnerable among us.
As we begin to understand the impact of COVID-19 on the remainder of our season, your continued support means a great deal to us. We are offering a number of options for exchanging/refunding tickets that have been purchased for the St. Patrick’s Concert, and will be in touch with those patrons. Please continue to check our website www.tmgcharleston.com for updates about the remainder of the season.
We are thankful for you; you are the reason we come together, and you are the reason we will continue to, once things have settled. We look forward to singing for you again as soon as possible!
With best wishes for your health,
The Taylor Music Group” 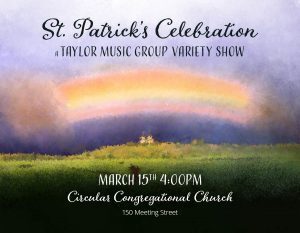 “This year’s concert is in a different format,” said Rob Taylor, Taylor Music Group Director. “This will be a true variety show, showcasing the talents of many of Charleston’s greatest folk and classical artists. There also might be a humorous story or two that sneak their way into the afternoon. This year’s show is dedicated to my wife Mary, who is not able to perform this year as she is being treated for a cancer recurrence. She is doing well and in great spirits however, and her spirit will be with us during the concert.”

Tickets for the concert are $25 general seating and $35 preferred seating and $15 students. Tickets can be purchased at www.tmgcharleston.com and at the door one hour prior to the concert. As a special fundraiser for the Taylor Music Group, patrons can choose to make a donation of $25 to the Taylor Music Group which will upgrade their seating to Preferred Seating and enter them into a raffle for a “Luck of the Irish” gift basket.

The TMG is a non-profit umbrella organization hosting sister ensembles Na Fidléirí and the Taylor Festival Choir (TFC). Led by Robert Taylor, DMA, TFC performs the finest choral literature from all eras, with particular emphasis on music of the 20th and 21st centuries, and folk music from the Celtic nations. Personnel in the ensemble include conductors, educators, performers and professionals from throughout the United States. TFC serves as the professional choir-in-residence at the College of Charleston. It presents a full concert season in the Charleston area, and serves as the flagship ensemble for the Piccolo Spoleto Celtic Arts Series.

The two ensembles are united by the same core values: TMG believes that the connection between “high art” and “art of the people” is a sacred one that is vital for the continued viability of all art. TMG also believes that the performing arts are inexorably linked to arts education and instruction. With programmatic activities, both performing and educational, TMG brings its mission to life in the Lowcountry and across the nation.

The group’s members are diverse and reside throughout the Charleston-metro area. The ensemble has a performing repertoire of more than 50 tunes, primarily Irish in origin, performed entirely from memory with traditional accompaniment. Na Fidléirí has performed throughout Charleston and the Southeast. It toured Ireland to critical acclaim with its sister ensemble the Taylor Festival Choir in the summer of 2013.

Follow us
Related Topics:Circular Congregational ChurchTaylor Music Group
Up Next

“Baby Shark Live!” Scheduled for May 12th at the North Charleston PAC postponed