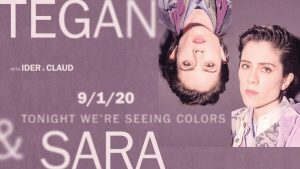 The Charleston Music Hall announced today that Grammy Award-nominated, platinum-certified duo Tegan & Sara will perform at the downtown venue on Tuesday, September 1st at 8 pm. Following a sold-out, multi-dimensional headline tour last year, Tegan & Sara return to the road in support of their latest release, Hey I’m Just Like You. Tickets go on sale Friday, March 13th at 10 am.

Hey, I’m Just Like You received praise from both The New York Times and Pitchfork who highlighted how the record saw the duo “re-recording demos they wrote as teenagers and polishing them into poignant synth-pop gems.” Additionally, they landed appearances on A Little Late with Lilly Singh and The Late Show with Stephen Colbert where they performed lead single “I’ll Be Back Someday.” To accompany the record, Tegan & Sara penned the memoir High School, which became an immediate New York Times Bestseller.

Tegan and Sara have sold well over one million records and performed on some of the world’s biggest stages, from Coachella to the Academy Awards. They have received three Juno Awards, a Grammy nomination, a Governor General’s Performing Arts Award, and the 2018 New York Civil Liberties Union Award. In 2016, they created the Tegan and Sara Foundation, which fights for health, economic justice, and representation for LGBTQ girls and women. Learn more about the Tegan and Sara Foundation HERE.

Tegan and Sara performed at the 2019 LOVELOUD Festival, a Utah music festival benefiting local and national LGBTQ charities. Tegan serves on the board of LOVELOUD Foundation, which was founded by Imagine Dragons front man Dan Reynolds.

Follow us
Related Topics:charleston music halltegan & sara
Up Next