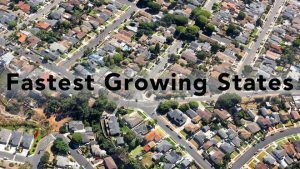 A new report by 360 Quote found that South Carolina is the 9th fastest-growing state in the U.S. The report ranked states by the percentage change in population over the past year, taking into account births, deaths, international migration, and domestic migration.

In order to determine the fastest-growing U.S. cities and states, researchers analyzed data from the U.S. Census Bureau. Population growth was measured as the percentage increase or decrease in residents from 2013 to 2018 for cities and from 2017 to 2018 for states. Researchers also calculated population changes due to births, deaths, international migration, and domestic migration to provide additional insight into the evolving demographics of each location.

Here is a summary of the data for South Carolina:

For reference, here are the statistics for the entire United States:

For more information, a detailed methodology, and complete results for all U.S. cities and states, you can find the original report here.