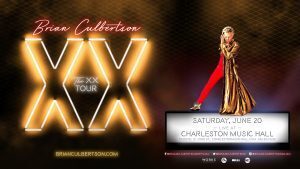 The Charleston Music Hall welcomes back Brian Culbertson on Saturday, June 20th at 8 pm. As chart-topping multi-instrumentalist, songwriter, and producer Culbertson crafts his 20th album, the aptly titled XX, he revealed plans for the extensive US concert tour that will support the record release.

“It’s a mix of things that I’ve done throughout my twenty records,” Culbertson said. “There’s a lot of funky instrumentals, some pop-sounding tracks, a couple of slow jams, straight-ahead jazz, gospel, some vocals, lots of horns and some straight-up FUNK! The album is very much a mixture of some modern-sounding programming along with live instruments, too. Real drums on almost everything mixed with programming. Definitely a cool sound.”

The musician invites fans to get involved with the making of XX via an Indiegogo campaign that launched this week.

Tickets for Culbertson’s show go on sale Friday, March 6th at 10 am.
–

Will Downing Plays the Charleston Music Hall on May 28th