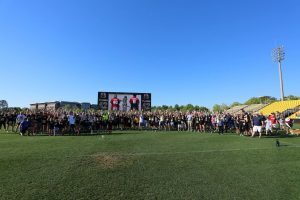 With 35 Tillman Honor Runs in the country, the Charleston Honor Run is the second most attended event, next to the one hosted by Arizona State University, drawing over 1,000 attendees each year. Tillman Honor Runs take place in select cities across the country in honor of the late NFL star and Arizona State University football player, Pat Tillman, who left his professional football career to serve with the 75th Ranger Regiment in Afghanistan and later died during military combat operations in 2004.

100% of the funds raised through each Honor Run benefit the Pat Tillman Foundation’s “Tillman Scholar Program,” which provides veterans and their spouses with educational scholarships, professional development, and networking to national database of industry leaders and military veterans. In 2019, the Charleston Honor Run raised more than $25,000 for the cause.

In recognition of Tillman’s #42 ASU jersey, the Charleston Honor Run kicks off with a .42-mile fun run for kids, followed by a family-friendly 4.2-mile walk/run. The event also includes a pre-race celebration featuring live music and kids’ activities, in addition to an after-party at Dockery’s with raffle prizes, food and libations.

“It’s hard to believe that it’s the fifth year of the Charleston Honor Run; we couldn’t do it without the support of the Daniel Island community, local businesses, and of course the event attendees,” said Jackson. “The spirit of the race is to bring friends, families and fans together for a fun day outside to remember Pat and what he did with his life.”

Registration is officially open and 100% of ticket sales benefit the Pat Tillman Foundation. Tickets are $40 for adults and $10 for kids. Registrants are encouraged to sign up before April 11th to guarantee a free event t-shirt.

Register on the Eventbrite page: https://www.eventbrite.com/e/charleston-sctillman-honor-run-registration-85503103083

Ticket and Volunteer Registration Open for the 2021 PGA Championship