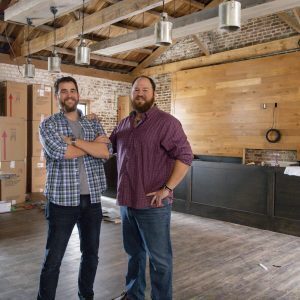 Bumpa’s, a new bar inside a recently restored 19th Century warehouse, will open its doors at 5 Cumberland Street this April. The French Quarter spot will offer patrons food and drinks inside the 150-year-old warehouse. It is the first bar concept by brothers Dan and Conor Sullivan (right), who are paying tribute to their grandfather, “Bumpa.”

Although not a traditional Irish Pub, the Sullivans say their bar will borrow elements from their Irish heritage – including the starring role that potatoes play on their menu. The duo says the bar menu will be highlighted by signature, hand-cut French fry combinations.

“We set out to create a bar and elevated neighborhood spot that we would be excited to frequent ourselves,” Dan Sullivan said. “Guests can expect an inviting atmosphere, curated cocktails, and craft beer, all complemented by bites and plates inspired by the playful spirit of our family, and especially our grandfather.”

Along with architect David Richards and builder Paul Koenig (the same team that brought the iconic Husk bar and restaurant to life), the owners have spent more than 10 months stripping the 3,000 sq. ft., circa 1830 warehouse down to its bones.

The new design exposes the original handmade brick walls, heart pine timber frame trusses, purlins, and roof deck. The restaurant has been outfitted with new structures, artisan-made lighting fixtures, and community tables alongside a custom-built bar of maple and granite.

At the kitchen’s helm will be Executive Chef Joe Palmitessa, who has held positions at Hotel Bennett and Kiawah’s Ocean Room. In addition to its French fry combinations, Bumpa’s menu will feature comfort foods.

“Our grandfather’s greatest joy in life was connecting with people and enjoying their company,” Conor Sullivan said. “We’re carrying on his legacy with this new gathering place.”

Bumpa’s is located at 5 Cumberland Street and will operate seven days a week from 2 pm to 2 am. Its spring opening date will be announced at @bumpas_chs and Bumpas-chs.com. In the meantime, you can enjoy a sneak peek here and get a taste at Charleston Wine + Food’s Culinary Village on Sunday at 12:30 pm.