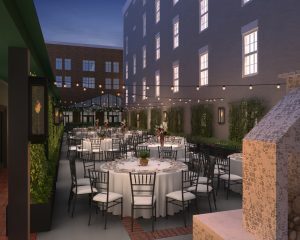 Emeline, an upcoming hotel from Makeready and Rockbridge, today announced who the leaders of their restaurant and bar program will be. Kara Czaplicki will serve as General Manager of Restaurant and Bar Operations, while Tim Morton was named Executive Chef. The duo will lead the program that includes Emeline’s onsite eateries, Frannie & The Fox and Clerks Coffee Company, in addition to banquets and catering and in-room dining.

“We know Charleston has an exceptional culinary scene and it will take great talent to really participate in the already thriving restaurants in this great city,” Christine Magrann, COO of Makeready, said. “We understand the importance to have the right people leading the introduction of these clever dining options. Kara and Tim are incredibly talented in their craft and their inviting spirit will make you come on in, grab a drink and make yourself at home.”

Frannie & The Fox will be a wood-fired eatery serving regional ingredients with Italian influences available in both an indoor and outdoor courtyard setting. Chef Morton is designing a menu that will be comprised of sharable dishes. For a taste of the menu, Chef Morton will be participating in Charleston Wine + Food Festival’s Night Bazaar on March 6th and the Culinary Village on March 7th.

Here’s a closer look at Czaplicki and Morton – straight from Emeline:

Kara began her career in hospitality nearly 23 years ago as she took on various fine dining and bartending jobs to support her passion for ballet and art classes in college. Along the way, she developed an appreciation for the nuance of flavor and by using her design background, she has been able to provide oversight for crafting a choreographed experience that makes a space feel comfortable and the experience unforgettable.

With Makeready’s commitment to offering unique experiences that are locally curated with the city in mind, Kara has spent the past year on Makeready’s restaurant and bar operations task force familiarizing herself with each properties’ food and beverage programming. Now as she steps into the role of General Manager of Restaurant and Bar Operations at Emeline, she will focus on introducing Frannie & The Fox and Clerks Coffee Company. She brings with her a team-oriented approach centered around mutual respect for diners and staff alike and looks forward to assembling a team as welcoming as the Charleston community.

Kara received her Bachelor of Fine Arts degree from Kent State and will be based in Charleston.

Tim fell in love with working behind a busy kitchen at the age of 16. As a native Minnesotan who has called Charleston his home for the past five years, he has developed an appreciation for hospitality, creating special moments for guests in an atmosphere that will make you feel at home.

Tim earned his 20-year skillset by working with Forbes Five Star rated hotels and restaurants. Most recently, he led the opening of Mercantile and Mash in Charleston as executive chef. Before the Lowcountry, he was the executive sous chef at The Umstead Hotel and Spa in Raleigh under the leadership of Steven Greene and previously Scott Crawford. Prior to that, he spent time as chef tournant of Chicago’s famed Alinea restaurant. His dynamic background being mentored by some of the most notable chefs has shaped his vision as he steps into his role with Emeline.

As the Executive Chef at Emeline, Tim will demonstrate his belief in the art of seasonal cooking, highlighting regional Charleston ingredients into Emeline’s restaurant and bar program.

He is a graduate of the College of Coastal Georgia where he was accredited by the American Culinary Federation through its Culinary Apprentice Program at Sea Island Resort.