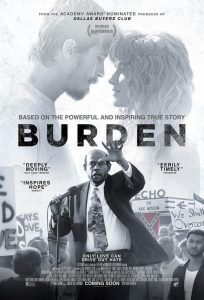 The 11th Annual Terrace Charleston Film Festival takes place this Thursday through Sunday (3/5-3/8/20) at the James Island cinema. The event features a selection of local, national, and international films.

One of the featured films tells a story from the town of Laurens, SC. On Friday, March 6th, at 7 pm, The Echo Project will sponsor a screening of BURDEN at the Terrace Theater.

BURDEN is the real-life story of The Echo Project’s founder, Rev. David Kennedy, and his fight to close The Redneck Shop, a KKK Museum and Neo-Nazi meeting place in Laurens.
A full synopsis of the film can be found below:
When a museum celebrating the Ku Klux Klan opens in a small South Carolina town, the idealistic Reverend Kennedy (Academy Award®-winner Forest Whitaker) resolves to do everything in his power to prevent long-simmering racial tensions from boiling over. But the members of Kennedy’s congregation are shocked to discover that his plan includes sheltering Mike Burden (Garrett Hedlund), a Klansman whose relationships with both a single-mother (Andrea Riseborough) and a high-school friend (Usher Raymond) force him to re-examine his long-held beliefs. After Kennedy helps Mike leave behind his violent past, the Baptist preacher finds himself on a collision course with manipulative KKK leader Tom Griffin (Tom Wilkinson). In the face of grave threats to himself and his family, the resolute Kennedy bravely pursues a path toward peace, setting aside his own misgivings in the hopes of healing his wounded community. From Oscar®-nominated filmmaker Robbie Brenner (Dallas Buyers Club) and writer/director Andrew Heckler comes this dramatic true story of compassion and grace in the American South.

There’ll be a Q&A afterward with Rev. Kennedy and Andrew Heckler, and all proceeds will go to The Echo Project, which has been founded to transform the former Redneck Shop into a community and diversity center.

Charleston will be the first public screening of this movie in South Carolina. Tickets are available here: https://terracetheater.com/movie/burden