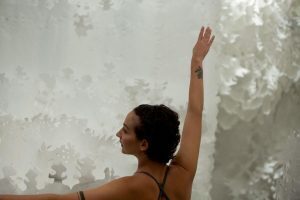 Annex Dance Company’s “Cocktails & Conversation” series returns to the Cannon Street Arts Center on Friday, April 3rd, 2020 at 6 pm. Joining the company is visual artist Leslie Alexander whose paintings provided the visual inspiration for the company’s new work, “Behind, Beyond, Between.”Tickets are “pay what you will” and can be purchased online at http://tickets.annexdancecompany.org or at the door.

“The idea was to use a lecture/demonstration style performance to help audiences get to know the company,” Alexander said.

The series continued to be a part of the next four seasons, allowing patrons to see works in progress in an informal studio performance. Although the company has continued to have open rehearsals and invite patrons to previews of work, this will be the first “Cocktails & Conversation” since 2014.

On April 3rd, the company will host “Cocktails & Conversation” in the gallery space at the Cannon Street Arts Center. The company’s new piece “Behind, Beyond, Between” will be previewed before it is fully produced next season. Visual artist Leslie Alexander, whose new series of paintings entitled “Pathways and Portals” prompted the creation of this work, will be in attendance with pieces of art displayed.

“This is the perfect venue for the event, providing an intimate setting to view the choreography against the backdrop of Leslie’s paintings,” Alexander said.

“Cocktails & Conversation” is a “pay what you will” performance with all of the proceeds going towards the company’s “10 years in Charleston Campaign.”

“We set a goal of $10,000 in celebration of our 10 years in Charleston,” Alexander said. “The generosity from supporters near and far has been incredible; we hope this event will be a great indication of the kind of work and collaborations donations can support.”

“Cocktails & Conversation” will be held at the Cannon Street Arts Center (134 Cannon Street) on Friday, April 3rd, 2020 from 6 pm to 7:30 pm. Tickets are “pay what you will” and can be purchased online at http://tickets.annexdancecompany.org or at the door.