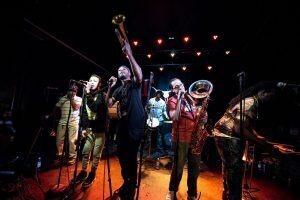 Charleston Beer Fest (CBF) returns for its ninth year on Saturday, May 23rd with a day of craft beer, live music, and interactive games, all to benefit Palmetto Community Care. In between tasting brews from over 40 breweries (plus ciders, meads, spiked seltzers, and non-alcoholic options), guests can listen to live bands rotating on two stages in North Charleston’s Riverfront Park. The headliners include the legendary, Grammy-winning Rebirth Brass Band from New Orleans and local reggae stalwarts The Dubplates, each playing 90-minute sets.

Formed in 1983 by the Frazier Brothers, Rebirth Brass Band combines the best elements of traditional brass bands with funk and hip-hop flavors for a unique sound that’s sure to get any party rocking. Having previously wowed Charleston audiences at Spoleto Festival and The Pour House, attendees will not want to miss Rebirth’s memorable return to the Holy City on the Main Stage at 5 pm.

The Dubplates have a Billboard No. 1 reggae album featuring top songs with King Yellowman, Mix Master Mike, and Future Fambo, and will take the stage at 3 pm. Entertainment will rotate between two stages in the park with a focus of music on the main stage and a DJ, interviews, and entertainment on the second stage.

For the craft beer enthusiasts, select breweries will pour at least one beer that is limited release or hard-to-find. Ticket buyers will receive more beer tasting tickets than ever before, and VIPs will gain access an hour before general admission guests. Festivalgoers can expect expanded food and drink offerings, including items for non-beer drinkers.

As part of a new, expanded focus for this year’s celebration, favorite local brewers will rub shoulders with those from beyond the Carolinas including: