Love Him Or Hate Him, Trump Knows How To Energize Crowds

A Donald Trump rally is akin to the Super-bowl, an evangelical crusade, or a legendary rock concert. Simply stated, it is civilized mass hysteria, or as the Donald puts it ‘it’s a love fest’. Ten of thousands of Trump supporters, mostly republicans, conservatives, and those leaning from independent and democrat parties, boldly back the 45th president and his ‘America First’ and ‘Keep America Great’ platforms.

Aside from Barack Obama breaking down the color barrier in the White House, no other president in the modern era has invigorated blue collar America more than Donald Trump. His ‘Pro America’ message rings loud and clear with his followers, all enthralled by the president’s magnetism.

Although Trump may not be remembered as one of the greatest presidents of all time, he may turn out to be either the smartest or shrewdest to occupy the Oval Office. With unrest in the democratic primaries and democrats beating each other and the party up, Trump continues to canvas the country popping up where primaries and caucuses are taking place. Trump follows the democrats caravan from state to state rallying his base. No other president has connected with their base as Trump has.

While Bernie and Biden and the rest of the hopefuls continue to spew barbs at each other, all the while tearing down Trump, POTUS visits communities re-assuring hard working patriotic Americans that he (Trump) has their best interests in mind, and will continue to promote faith, family, country, the military, and more importantly the constitution.

He carried that same positive directive with him when speaking before 13K plus supporters recently (Feb 28) at the North Charleston Coliseum. Trump fans young and old, male and female, lined up days before the rally hoping to be among the select to make it inside the arena. Many traveled from across the state, or from neighboring states, with some attending their 20th rally. Reminds me of Grateful Dead fans.

Like a sly poker player, Trump knows how and when to play his hand. On the eve of the democratic primary in South Carolina Trump delivered a patriotic message to thousands of fans at the coliseum, with thousands more watching on the big screen outside, and millions on national television. With SC senators Lindsey Graham and Tim Scott, as well as SC Governor McMaster and his team in tow, the Donald was in rare form Friday night. 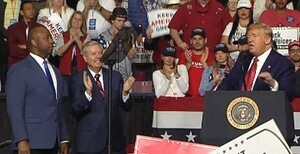 Although Trump’s message never wavers whether he’s in Iowa, New Hampshire, Arizona, or Nevada, crowds fill huge coliseums, merely to be in his presence and bask in his patriotic aura. The ‘America First’ motto continues to pick up steam. Many who attend the rallies want to feel his energy, and get rejuvenated themselves about the United States of America. Trump never fails to talk about the economy, low un-employment, the border wall, opportunity zones, and how his administration is combating terrorism.

Whether you love or hate him, President Donald J. Trump is easily a gifted motivational speaker, and an awesome stand up comedian. His retorts regarding the democratic leadership, those running for the presidency, the fake media, impeachment, and the ‘never Trumpers’ are insanely hilarious. Like the old Saturday Night Live skit, Trump knows ‘how to pump you up’!

I spoke with locals and couples who made the trip from Myrtle Beach and Savannah, Georgia, and all echoed the same comments. They were simply attending the rally to support a president they all agree is putting America first and defending many of the liberties and freedoms they hold dear to.

Diehard Trump haters were positioned nearby the coliseum, out to bring their own message, that Trump has not lived up to his campaign promises, and that he has done more to divide the country than unite it. But the protesters were few, and easily outweighed by Trump supporters.

Republicans and democrats often skew information, and are biased, but the true value of the president of the United States is in their ability to lead the country. What possessed a comfortable billionaire like Trump, to step into the media fire, and come under such scrutiny unless he truly wanted to make America great again. Results matter over rhetoric, and only time will tell how President Trump will be remembered.

Follow us
Related Topics:donald trumpnorth charleston coliseum
Up Next