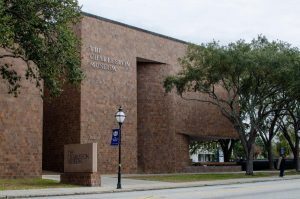 In association with the 350th anniversary of the founding of Carolina, The Charleston Museum will present its Charleston 350 Commemoration Lecture Series featuring leading scholars in their respective fields looking at the early history of the colony that would become South Carolina. The lectures will examine the three cultures that came together to influence the area’s early history – Native Americans, enslaved people and Europeans.
The series will kick off on Thursday, March 5th, at 6 pm with a lecture by Dr. Jon Marcoux, Director of the Clemson University and College of Charleston’s joint Graduate Program in Historic Preservation. Marcoux will present “Lowcountry Life before Charles Towne: Native American Communities in 1669,” and discuss the peoples who were in South Carolina prior to the permanent arrival of Europeans.
On April 2nd, Dr. Daniel Littlefield, Carolina Professor of History at the University of South Carolina, will speak about the first enslaved people that were brought to Carolina and why the institution eventually thrived as it did in the colony.
To close out the lecture series, on May 7th, Dr. David Cranford, Assistant State Archaeologist for the North Carolina Department of Cultural and Natural Resources, will discuss the amalgamation of cultures, principally their influence on colonware, an important ceramic of the period with both Native American and African characteristics.
Carl Borick, Director of The Charleston Museum, notes that “we have invited scholars to speak about what South Carolina was like at the time it was colonized and how that affected its development culturally, socially and economically. We wanted to speak to the history of the founding of the colony, not solely from the perspective of European settlers, but from other voices who were central to that history. We see this as an excellent contribution to the 350th commemoration.”
All lectures will be at 6 pm in The Charleston Museum’s Arthur M. Wilcox Auditorium and are free and open to the public. Registration is encouraged but not required.
Website information on March 5th lecture: http://bit.ly/3bOqmiE
Events at The Charleston Museum: https://www.charlestonmuseum.org/news-events/events/
–
Press Release