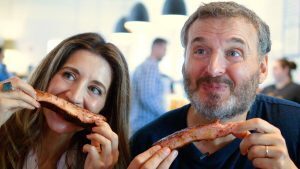 
Perhaps best known for being the creator, writer, and executive producer of the sitcom Everybody Loves Raymond, Rosenthal went on to host the six-episode PBS television series I’ll Have What Phil’s Having, where he went around the world exploring various food cultures. The series was essentially reworked into Somebody Feed Phil, which premiered on Netflix in 2018.

You can see the episode of “Phil’s Finds” featuring Lewis Barbecue – and travel writer Megan Murphy – below.